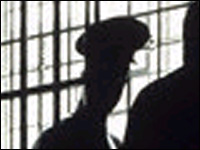 A prison is a world apart, and the fact that 40% of Palestinian males have found themselves in one (almost always uncharged and then released after quite some time), makes it important to understand more about them. I actually have kind of a "fascination" with these kind of places, as my Psychology studies always brought me to read with great interest the various experiments by the Situationist Psychologists, who create a situation that the subjects live in, bringing about conclusions about social environments, many of them having to do with submission to authority and the creation of an authoritarian figure. Power dynamics in a controlled environment are indeed revealing. Irving Goffman, Stanley Milgram and Philip Zimbardo have done some important work, and whilst trawling internet, visiting my favourite sites, I hit upon one by Zimbardo, where this very interesting interview from last year was published. Take a look at it, the comparisons to Abu Ghraib are something to think about.
http://www.prisonexp.org/edge/
You Can't Be a Sweet Cucumber in a Vinegar Barrel:
A Talk with Philip Zimbardo in Edge, January 19, 2005
"When you put that set of horrendous work conditions and external factors together, it creates an evil barrel," writes the eminent situationist psychologist Philip Zimbardo, known for his famous Stanford Prison Experiment in the early Seventies.

"You could put virtually anybody in it and you're going to get this kind of evil behavior," he continued. "The Pentagon and the military say that the Abu Ghraib scandal is the result of a few bad apples in an otherwise good barrel. That's the dispositional analysis. The social psychologist in me, and the consensus among many of my colleagues in experimental social psychology, says that's the wrong analysis. It's not the bad apples, it's the bad barrels that corrupt good people. Understanding the abuses at this Iraqi prison starts with an analysis of both the situational and systematic forces operating on those soldiers working the night shift in that 'little shop of horrors."

About 30 years ago, Zimbardo and his colleagues began to do research on dehumanization. "What are the ways in which, instead of changing yourself and becoming the aggressor, it becomes easier to be hostile against other people by changing your psychological conception of them?" he asked. "You think of them as worthless animals. That's the killing power of stereotypes."

He connected that work with the work he had done during the Stanford Prison Experiment. "The question there was," he says, "what happens when you put good people in an evil place? We put good, ordinary college students in a very realistic, prison-like setting in the basement of the psychology department at Stanford. We dehumanized the prisoners, gave them numbers, and took away their identity. We also deindividuated the guards, calling them Mr. Correctional Officer, putting them in khaki uniforms, and giving them silver reflecting sunglasses like in the movie Cool Hand Luke. Essentially, we translated the anonymity of Lord of the Flies into a setting where we could observe exactly what happened from moment to moment."

He found in that experiment that it is "really a study of the competition between institutional power versus the individual will to resist. The companion piece is the study by Stanley Milgram, who was my classmate at James Monroe High School in the Bronx. (Again, it is interesting that we are two situationists who came from the same poor neighborhood.) His study investigated the power of an individual authority: Some guy in a white lab coat tells you to continue to shock another person even though he's screaming and yelling. That's one way that evil is created as blind obedience to authority. But more often than not, somebody doesn't have to tell you to do something. You're just in a setting where you look around and everyone else is doing it. Say you're a guard and you don't want to harm the prisoners—because at some level you know they're just college students—but the two other guards on your shift are doing terrible things. They provide social models for you to follow if you are going to be a team player."