US Senator explains how it all works.... illuminating! 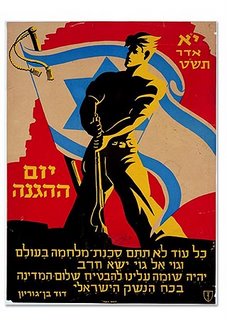 the poster says: March 1949, Hagana Day "As long as the danger of war in the world has not ceased and as long as nations raise their swords at each other, it is our responsibility to guarantee peace in our country with the power of the Israeli weapon." David Ben Gurion

The following letter was sent to me today by James Abourezk, former U.S. Senator from South Dakota, and he readily complied when I asked that 'llI be allowed to forward it to my list because what he had to say is of the utmost importance, given last month's election and all the new faces in Congress...

I just finished reading your critique of Noam Chomsky's positions in an e mail sent to me by Tony Saidy.

I had never paid much attention to Chomsky's writings, as I had all along assumed that he was correct and proper in his position on the Arab-Israeli conflict.

But now, upon learning that his first assumption is that Israel is simply doing what the imperial leaders in the U.S. want them to do, I concur with you that this assumption is completely wrong.

I can tell you from personal experience that, at least in the Congress, the support Israel has in that body is based completely on political fear--fear of defeat by anyone who does not do what Israel wants done. I can also tell you that very few members of Congress--at least when I served there--have any affection for Israel or for its Lobby. What they have is contempt, but it is silenced by fear of being found out exactly how they feel. I've heard too many cloakroom conversations in which members of the Senate would voice their bitter feelings about how they're pushed around by the Lobby to think otherwise. In private one hears the dislike of Israel and the tactics of the Lobby, but not one of them is willing to risk the Lobby's animosity by making their feelings public.

Thus, I see no desire on the part of Members of Congress to further any U.S. imperial dreams by using Israel as their pit bull. The only exceptions to that rule are the feelings of Jewish members, whom, I believe, are sincere in their efforts to keep U.S. money flowing to Israel .
Secondly, the Lobby is quite clear in its efforts to suppress any congressional dissent from the policy of complete support for Israel which might hurt annual appropriations. Even one voice is attacked, as I was, on grounds that if Congress is completely silent on the issue, the press will have no one to quote, which effectively silences the press as well. Any journalists or editors who step out of line are quickly brought under control by well organized economic pressure against the newspaper caught sinning.

I once made a trip through the Middle East , taking with me a reporter friend who wrote for Knight-Ridder newspapers. He was writing honestly about what he saw with respect to the Palestinians and other countries bordering on Israel. The St. Paul Pioneer press executives received threats from several of their large advertisers that their advertising would be terminated if they continued publishing the journalist's articles. It's a lesson quickly learned by those who controlled the paper.

With respect to the positions of several administrations on the question of Israel, there are two things that bring them into line: One is pressure from members of Congress who bring that pressure resulting in the demands of AIPAC, and the other is the desire on the part of the President and his advisers to keep their respective political parties from crumbling under that pressure. I do not recall a single instance where any administration saw the need for Israel's military power to advance U.S. Imperial interests. In fact, as we saw in the Gulf War, Israel's involvement was detrimental to what Bush, Sr. wanted to accomplish in that war. They had, as you might remember, to suppress any Israeli assistance so that the coalition would not be destroyed by their involvement.

So far as the argument that we need to use Israel as a base for U.S. operations, I'm not aware of any U.S. bases there of any kind. The U.S. has enough military bases, and fleets, in the area to be able to handle any kind of military needs without using Israel. In fact I can't think of an instance where the U.S. would want to involve Israel militarily for fear of upsetting the current allies the U.S. has, i.e., Saudi Arabia and the Emirates. The public in those countries would not allow the monarchies to continue their alliance with the U.S. should Israel become involved.

I suppose one could argue that Bush's encouragement of Israel in the Lebanon war this summer was the result of some imperial urge, but it was merely an extension of the U.S. policy of helping Israel because of the Lobby's continual pressure. In fact, I heard not one voice of opposition to the Israeli invasion of Lebanon this summer (except Chuck Hagel). Lebanon always has been a "throw away" country so far as the congress is concerned, that is, what happens there has no effect on U.S. interests. There is no Lebanon Lobby. The same was true in 1982, when the Congress fell completely silent over the invasion that year.

I think in the heart of hearts of both members of congress and of the administrations they would prefer not to have Israel fouling things up for U.S. foreign policy, which is to keep oil flowing to the Western world to prevent an economic depression. But what our policy makers do is to juggle the Lobby's pressure on them to support Israel with keeping the oil countries from cutting off oil to the western nations. So far they've been able to do that. With the exception of King Feisal and his oil embargo, there hasn't been a Saudi leader able to stand up to U.S. policy.

So I believe that divestment, and especially cutting off U.S. aid to Israel would immediately result in Israel's giving up the West Bank and leaving the Gaza to the Palestinians. Such pressure would work, I think, because the Israeli public would be able to determine what is causing their misery and would demand that an immediate peace agreement be made with the Palestinians. It would work because of the democracy there, unlike sanctions against a dictatorship where the public could do little about changing their leaders' minds. One need only look at the objectives of the Israeli Lobby to determine how to best change their minds. The Lobby's principal objectives are to keep money flowing from the U.S. treasury to Israel, requiring a docile congress and a compliant administration. As Willie Sutton once said, "That's where the money is."