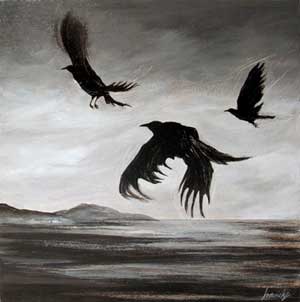 The Cat's Dream (via Uruknet)

There is a sinister caw in the air. Important journalists, liberal commentators, leftist activists, Middle East experts, influential intellectuals, professionals of the antiwar movement with their progressive think tanks and peace networks are now discussing the hanging of Saddam Hussein when nothing had written or said before this vile assassination and often contributed to the lynching through a campaign of misinformation and propaganda.

Who remembers now how all this started? The rotten lies of Tony Blair’s "45 minutes" and Condoleezza Rice’s "mushroom cloud" have been used to justify the supreme international crime, the invasion and occupation of Iraq, a defenseless country that had never attacked the United States, that did not have any weapons of mass destruction, that did not have any ties to al-Qaida, that had no connection to the September 11 attacks... About one million Iraqis have been slaughtered, many more millions displaced and a civil war orchestrated. Finally Saddam Hussein, President of the Republic of Iraq, was assassinated.

Former UN Secretary General Kofi Annan called the invasion of Iraq "an illegal act that contravened the UN charter"; the Nuremberg trials of major Nazi war criminals had already called this crime the "supreme international crime". This supreme international crime started on 20 March 2003 and it’s still being committed. Iraq is an occupied country without sovereignty where terrorists and mass murderers compose its quisling sectarian government. Since 20 March 2003 everything happening in and around Iraq is outside international law and the effects of this persisting illegality is the apocalypse before our eyes.

Now let’s go back to the assassination of the legitimate President of the Republic of Iraq.

Instead of pointing out the barbarity of this umpteenth crime and calling for the restoration of international law and the punishment of its perpetrators, the crows add their caw to the hyenas and vultures of the lynching mob and discuss the alleged crimes of the victim. ZNet, the fleet admiral of the Imperial antiwar movement information network, published several pieces on the death of Saddam Hussein. All these pieces had the same point of view. In "TALKING POINTS ON THE EXECUTION OF SADDAM HUSSEIN", Phyllis Bennis, one of the most prominent voices of the American anti-war movement, writes:


With U.S. officials still running the legal show in Baghdad, the U.S. military occupation still in control of the country, and the escalating war engulfing Iraq, no trial held under these conditions can be considered legitimate.

The readers must remember that even if Saddam Hussein had been trialed by an international court and had had a "fair trail" instead of that revolting barbarian lynching culminated with his assassination, that would have been illegal under international law because that too would have been the result of that supreme international crime, the illegal invasion and occupation of a sovereign country. Focusing on the victim’s alleged crimes instead of the supreme international crime that our governments have been committing since March 2003 serve to validate that crime, legitimate the quisling Iraqi government and open the door to more invasions and occupations in the future.

Either we respect and uphold international law or we accept to live in a world ruled by violence and the arbitrary act of the powerful but we cannot choose which part of international law we like, according with our political view, mood and whims of the moment. The vague concept of human rights as advocated by discredited organizations such as Human Rights Watch cannot and must not disrupt the UN Charter and the whole building of international law. We have seen the result of this way of thinking and acting. The so-called humanitarian [sic!] interventions, always orchestrated by the Empire toward countries in the South or in the East, it’s an international law monstrosity that has already produced oceans of blood and deserts of corpses.

Empire is an ugly business and human rights have been used as a Trojan horse to sell it. The war of aggression against Iraq has shown very clearly that the Western antiwar movement apparatus has been another Trojan horse where racism, ideologies and self-interest have completely obscured compassion, justice and humanity. 'We know better' has been opposed by Western arrogant intellectuals and self-righteous activists to the Iraqis cry. Iraq has become a business, 'our business'.

Kola Odetola recently wrote on Media Lens Message Board: "The silence of the western antiwar movement on the lynching of Saddam Hussein is deafening and is increasingly beginning to prove what a lot of discerning people have suspected all along – that the mainstream anti-war movement (including large parts of its left wing) in the west is the well concealed left boot of western imperialism, the conscience of the conqueror."

After their disgraceful silence on the lynching of the assassinated President of the Republic of Iraq, the Western antiwar movement’s professionals are now explaining the barbarity to an audience already brainwashed by our ruthless leaders and their jesters in the mainstream media; the result is a choir of crows, hyenas and vultures.

Since I started my writing on the Lynching of Saddam Hussein, I have been attacked and called names by members of the so-called antiwar movement. I have been accused to do "what the occupation wants", to be a "Saddamist", to be a "fascist", and again a paid agent of the CIA and/or the Mossad, even to "justify a Western attack on Iran". Who said that people "on the left" have no fantasy left?

Since my English is not that good, I will ask George Orwell to help me to write what I think: "But at least let us have no more nonsense about defending liberty against Fascism. If liberty means anything at all it means the right to tell people what they do not want to hear. The common people still vaguely subscribe to that doctrine and act on it… it is the liberals who fear liberty and the intellectuals who want to do dirt on the intellect…"