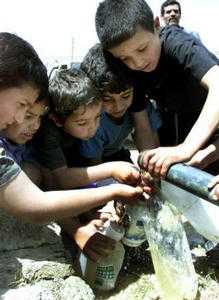 Israel controls water reserves in Gaza and the West Bank and seeks to control water resources in the Golan Heights and South Lebanon, said a report released by the Arab Water Studies and Water Security Center.

The report said Israel was thus present in major Arab water crises, adding that Israel consumed two billion cubic feet of water of which 65 percent were rechanneled from the Arab areas.

Moreover, it said despite limited water resources in the Palestinians territory, Israel took over more that 80 percent of them, noting that large Israeli water projects counted on drawing water from Arab sources.

Water, the report said, had always been one of Israel's strategic motives for military operations.

The average individual in Israel consumes three to four times as much water as the Palestinian, the report said, stressing that resolving the Israeli-Palestinian crisis was linked to the water issue.

The report called for consolidating Arab efforts to face increasing water challenges and to demand that Israel should stop controlling Arab water resources if peace was to be achieved.