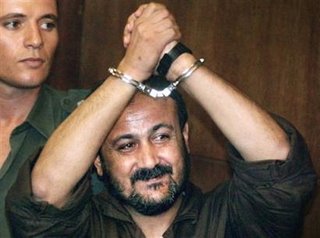 Since dawn on Sunday, approximately 11,000 political prisoners in Israeli jails have been on a hunger strike that will last through the evening today in protest and condemnation of the internal fighting between Fateh and Hamas.

Palestinian Legislative Council member and former Director of the Palestinian Prisoner Society, Issa Qaraqa', has received updates on the strike since the early morning. The prisoners decided to take this step in order to deliver a “clear and specific message that infighting is rejected as it not only serves the interests of the enemies of the Palestinian people, it endangers their goals and rights.”

Qaraqa' told PNN that the political prisoners said that if tensions and fighting return to the Palestinian street, the only weapon they will resort to inside the prisons will be to declare an open hunger strike until the internal crisis is defused.

The letter was penned by Fateh leader, PLC member and attorney Marwan Al Barghouti and one of the senior members and founders of Hamas, Yahya Snwar in Israeli Hadarim Prison. It was a strongly worded message which invited the antagonists to stop the fighting, prohibited spilling Palestinian blood, and that arms are not to be turned internally. The letter also made clear reference to the need to unite and to demonstrate renunciation of disagreement and feuds.