Paul Eisen - The J Word: or, the Agony is not exclusive property 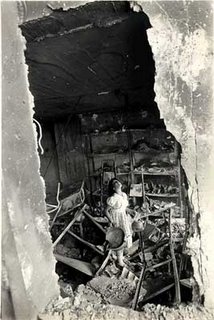 My friend Gilad has more than adequately exposed your shameful attempt, as described in the Jewish Chronicle, and the Yorkshire Post to use your money to silence free speech in Leeds University and to enforce on others your own shameful worldview. But may I add something of my own?

One of the reasons cited by you and others for the suppression of Akram Awad's excellent website Bonsoir, is the inclusion in it of the film -Deir Yassin: The Agony. This film, about the Deir Yassin massacre, centres on the testimony of one survivor of that massacre – Zainum Akel, now an elderly survivor but then a young bride-to-be – who is seen at the site of the massacre describing exactly what happened on April 9 1948.

I know that you would prefer that none of this testimony was seen. You don't want the world to know of Deir Yassin and the Nakba because then you could not maintain the spurious Jewish position as world number-one victim, even as Zionist Jews unleash untold misery on Palestinians and on so many others throughout the world. But those days are over. Now, even you can no longer get away with that kind of nonsense. So you find something in the film that you think you can get away with. And this is what you have found:

At one point in the film, Zainub Akel says, "The Jews snatched the son and threw him in the baking oven" .

Oh dear, it’s the J-word. No doubt about it, Zainum Akel said the J-word.

Well, Mrs Stowe, leave aside the fact that when Zainub Akel saw these terrible events carried out by the (shhh..the J-word) there was no Israel and therefore no Israelis she could name as the murderers. Leave aside also that in Palestine and throughout the Arab world it is perfectly normal and acceptable to refer to Jewish Israelis as Yahud (Jews) simply because that is what they are. And also Mrs. Stowe, leave aside the fact that Zionists, while constantly complaining about the J-word, at the same time promote ad nauseam their own Holocaust by blackening the name of pretty much the entire non-Jewish world: The German and Austrian peoples who they say conceived and perpetrated it; the Russian, Polish, Ukrainian, Lithuanian, Latvian, Estonian, Rumanian, Hungarian, peoples etc., etc who they say hosted, assisted in and cheered it on; the Americans, the British, the French, the Dutch, the Belgians, the Italians (but not the Danes and the Bulgarians) etc. who they say didn’t do enough to stop it; the Swiss who they say earned out of it and the entire Christian world who they say created the faith-traditions and ideologies in which it could take place - and now the Palestinian, Arab and Muslim peoples who they claim want to do it all over again – and all the while moaning about one little J-word on one Palestinian website.

Leaving all that aside Mrs. Stowe, I have some news for you:

The massacre at Deir Yassin including the throwing of that baby into the oven was perpetrated by Jews acting as Jews and for Jews. And the Zionist bullies at Leeds University, in their attempts to suppress free speech, to police the discourse and thus to maintain the oppression of Palestinians and others throughout the world, they are Jews, acting as Jews and for Jews.