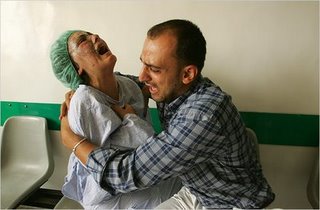 From Council for National Interest
State Department Report Delivered to Pelosi and Biden
February 7, 2007
At the height of the Israeli war against Hezbollah last summer, in which hundreds of civilians living in southern Lebanon were killed, the U.S. rushed a request from Israel for more than 1,300 American-made M26 cluster bombs. The request prompted an outcry in Congress and elsewhere that the artillery rockets, which disperse 644 submunitions each, might be used in civilian areas, contrary to the terms of the U.S. Arms Export Control Act. Last week, the Department of State delivered a preliminary report to Nancy Pelosi, Speaker of the House, and to Sen. Joseph Biden, chairman of the Senate Foreign Relations Committee, that is said by the news media to accuse Israel of exactly these charges.

A petition banning the use of cluster bombs and demanding an urgent clean-up of the more than 1 million cluster-bomblets sprayed over southern Lebanon has been launched by the American Task Force for Lebanon, a non-profit non-sectarian group based in Washington, DC. We urge our members to join the campaign that has been endorsed by Ralph Nader by signing their petition: "Stop the Carnage, Ban the Cluster Bomb."

In the closing days of the war, after a deadline had been set by the U.N. and accepted by both the Israelis and Hezbollah and 72 hours before the ceasefire was to go into effect, the Israeli military fired thousands of cluster munitions into southern Lebanon, leaving behind a deadly legacy. As of January 25, 2007, the United Nations Mine Action Coordination Center South Lebanon confirms that 30 people have been killed and 184 injured from unexploded ordnance since August 14, when hostilities between Hezbollah and Israel ended. Many of the casualties have been children.

Cluster bombs have been controversial for many years. They were used by the U.S. army in both Iraq wars, inflicting damage on civilians especially, and by the Israeli army in the 1982 invasion of Lebanon, prompting the Reagan administration to suspend shipment of the bombs to Israel for six years. The UK NGO Landmine Action has published evidence that Israel used American cluster munitions with expiration dates as early as 1974, which were made available to Israel from classified U.S. weapons depots in Israel. Thus the American taxpayer is once again supporting the slaughter of civilians through the misuse of its arms exports.

The findings of the State Department report on Israel's misuse of cluster bombs has not yet been made public. A resolution curbing the sale of cluster bombs last September that was introduced by Senators Dianne Feinstein (D-CA) and Patrick Leahy (D-VT) failed in the Senate by a vote of 70 to 30. A new resolution is said to be prepared by the senators for introduction in the Senate this year once the furor about the State Department findings has died down.