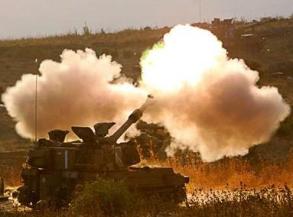 from IMEMC Thursday
February 08, 2007 00:35 by Saed Bannoura - IMEMC & Agencies
Israeli sources reported on Wednesday night that the Israeli army fired shells at a Lebanese military post across the border. Israel claims that the Lebanese army fire light bombs at military tanks operating in the area.

The Israeli army claimed that troops were still inside the sovereign Israeli territory when the Lebanese army fired the light bombs. Shortly after the incident, the Israeli army shelled a Lebanese military post opposite to Moshav Avivim settlement.

Initial Lebanese sources reported that apparently three Lebanese people were injured in the shelling. Currently, members of the United Nations Interim Force in Lebanon are trying to mediate in an attempt to prevent a new war in the area.

Israeli soldiers crossed on Wednesday the Lebanon border-fence and started a search campaign for "additional explosive devices" after claiming that the army found several explosive charges in the area two days ago.

Israeli sources reported that the army does not intend to cross the international borders between Israel and Lebanon which lie several dozen meters beyond the fence, an Israeli online daily reported.

Meanwhile, the army accompanied by military bulldozers and Engineering Crops are operating in the area, overturning mounds of earth, claiming an attempt to locate the bombs.

The statement also stated that the aim of the operation comes to emphasize the Israeli sovereignty along the international borders.

Yet, the Northern Command of the Israeli army is still unable to determine if the bombs, found on Monday, were placed recently by Hezbollah fighters or whether they were just exposed due to the heavy rains in the area.

On its part, Hezbollah party stated that the devices had been in the area before the outbreak of the war on July 12.

Israeli sources reported that the military operation is being conducted under heavy security, and that Israel informed the United Nations Interim Force in Lebanon (UNIFIL) about the operation, but said that Israeli soldiers will not cross the international border.

The Al Manar television station, the official station of Hezbollah, reported that UNFIL and Lebanese soldiers arrived at the scene.Earlier on Wednesday, Israel's Defense Minister, Amir Peretz, accused Syria of allowing the entry of arms to Hezbollah fighters through the Lebanese-Syrian border. Peretz said that Israel will act "forcefully against Hezbollah".