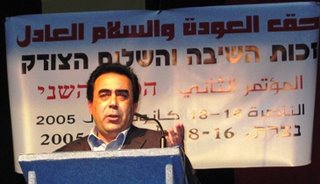 in the photo, Asad Ghanem
from the NYT ISABEL KERSHNER
8 February 2007

JERUSALEM, Feb. 7 -- A group of prominent Israeli Arabs hascalled on Israel to stop defining itself as a Jewish state and become a`consensual democracy for both Arabs and Jews,`prompting consternation and debate across the country.

Their contention is part of `The Future Vision of the Palestinian Arabs in Israel,` a report published in December under the auspices of the Committee of Arab Mayors in Israel, which represents the country`s 1.3 million Arab citizens, about a fifth of the population.

Some 40 well-known academics and activists took part. They call on the state to recognize Israeli Arab citizens as an indigenous group with collective rights, saying Israel inherently discriminates against non-Jewish citizens in its symbols of state, some core laws, and budget and land allocations. The authors propose a form of government, `consensual democracy,` akin to the Belgian model for Flemish- andFrench-speakers, involving proportional representation and power-sharing in a central government and autonomy for the Arab community in areas like education, culture and religious affairs.

The document does not deal with the question of a Palestinian state in the West Bank and Gaza Strip, where an additional three million Palestinians live under Israeli occupation without Israeli citizenship. The aim of the declaration is to reshape the future of Israel itself.

The reaction of Jewish Israelis has ranged from some understanding to a more widespread response, indignation.

Even among the center-left, where concern for civil rights is common, some have condemned the document as disturbing and harmful. On the right, Israeli Arabs have been accused of constituting a `fifth column,` a demographic and strategic threat to the survival of the state.

Rassem Khamaisi, one of the Future Vision participants and an urban planner, said: `The document reflects the Arab public`s feelings of discrimination. We should be looking for ways of partnership.`Many Israeli Arabs say they are second-class citizens who do not get the same services and considerations as Jews and face discrimination in employment, education and state institutions.

Last month, a Muslim Arab legislator from the Labor Party, Ghaleb Majadele, was named a government minister, the first in Israel`s history. That development has been criticized as unhelpful by other Israeli Arab politicians, who mostly boycott the mainstream Zionist parties, running forParliament on separate Arab lists and sitting in opposition.

In an interview, Mr. Majadele distanced himself from the new document, saying that pragmatic political action would help the Arab sector more than any ideological program.`The fact is that Israel is a Jewish state, a state with a Jewish majority,` he said. `Can we change that reality with words?`Yet Mr. Majadele said that he, too, felt uncomfortable with national symbols like the flag, with a Star of David, and the anthem, which speaks of the `Jewish soul` yearning for Zion.`These were made and meant for the Jews, and did not take the Arab minority into account,` he said. `If Israel wants to integrate us fully, then we need an anthem and flag that can do that. We and the state must think deeply if we want to take a step in that direction. But it must be by agreement, with the involvement of both sides.`Many of the Future Vision participants are affiliated with elite Israeli academic institutions. For example, Asad Ghanem, one of the document`s principal authors, is head of the Government and Political Theory Department at Haifa University`s School of Political Science.

As such, both Jewish conservatives and liberals have been taken aback by some propositions in the document. Many are angered by its description of Israel as the outcome of a`settlement process initiated by the Zionist Jewish elite`in the West and realized by `colonial countries` in the wake of the Holocaust.

Jewish critics argue that the Future Vision report negates Israel`s legitimacy and raison d`etre as the realization of Jewish self-determination; further, they say it undermines the idea of a two-state solution to the Israel-Palestinian conflict, since that implies the establishment of a Palestinian state alongside a Jewish one.

In January, the senior fellows and board of the Israel Democracy Institute, a generally liberal independent research group that has worked on projects with some ofthe same Arab intellectuals, wrote a response expressing`severe anguish` over the document`s contents. Prof. Shimon Shamir, a former Israeli ambassador to Jordan and Egypt, published a letter in Al Sinara, an Arabic weekly in Israel, stating that even among Jews who are generally sympathetic to Arab concerns, the Future Vision document `evokes a sense of threat.`The document has exposed some raw nerves. Israel`s Declaration of Independence promises full equality in social and political rights to all inhabitants, irrespective of religion, race or sex, and Israel`s Arab citizens participate in the country`s democratic process.

Over the decades, however, Jewish-Arab relations in Israel have been marked by mutual suspicion and resentment. From 1948 until 1966 Arabs here lived under military rule. A 2003 government report acknowledged discrimination by state institutions, and a recent report on poverty published last year by Israel`s National Insurance Institute indicated that 53 percent of the impoverished families in Israel are Arabs. And it is clear that the vast majority of Israel`s Jews consider the very essence of their state to be its Jewish identity.

Traditionally, Arab parties in the Parliament have focuseon peace and equality, but the Arab public has become frustrated with the lack of results, leading to a lower voter turnout. Most Arab Israeli politicians have rejected the Future Vision document as unrealistic, exposing divisions within the Arab community.

Arab parties hold 10 seats in the 120-seat Parliament and are sometimes accused by the Jewish establishment of provocations. During last summer`s Lebanon war, some Arab legislators were perceived as sympathizing with Hezbollah.

Now there are signs of growing assertiveness and extremism on both sides. Avigdor Lieberman, head of the hard-line Yisrael Beiteinu Party, which has 11 seats in the Parliament, wants to reduce the number of Arab Muslim citizens in Israel by eventually transferring some populous Arab towns and their inhabitants to a future Palestinian state.

A few Jewish Israeli liberals have welcomed the Future Vision document. Shalom (Shuli) Dichter, co-director of Sikkuy, a Jewish-Arab organization that monitors civic equality in Israel, has hailed the effort as opening a serious dialogue about the terms for genuine Jewish-Arab co-existence though he, too, took issue with the historical narrative adopted by the authors.

In January, 30,000 copies of the document were distributed to Arab homes with weekend newspapers. According to a poll of Arab Israelis by the Yafa Institute, commissioned by the Konrad Adenauer Program forJewish-Arab Cooperation, only 14 percent of respondents said they thought Israel should remain a Jewish and democratic state in its current format; 25 percent wanted a Jewish and democratic state that guarantees full equality to its Arab citizens. But some 57 percent said they wanted a change in the character and definition of the state, whether to become a `state for all its citizens,` a binational state, or a consensual democracy.