What 'Israel's right to exist' means to Palestinians 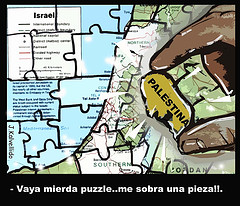 Drawing by Juan Kalvellido - "What a Shitty Puzzle, there's a piece left over."

Recognition would imply acceptance that they deserve to be treated as subhumans.

These three verbal formulations have been used by Israel, the United States, and the European Union as a rationale for collective punishment of the Palestinian people. The phrases are also used by the media, politicians, and even diplomats interchangeably, as though they mean the same thing. They do not.

"Recognizing Israel" or any other state is a formal legal and diplomatic act by one state with respect to another state. It is inappropriate – indeed, nonsensical – to talk about a political party or movement extending diplomatic recognition to a state. To talk of Hamas "recognizing Israel" is simply to use sloppy, confusing, and deceptive shorthand for the real demand being made of the Palestinians.

Israel has never defined its own borders, since doing so would necessarily place limits on them. Still, if this were all that was being demanded of Hamas, it might be possible for the ruling political party to acknowledge, as a fact of life, that a state of Israel exists today within some specified borders. Indeed, Hamas leadership has effectively done so in recent weeks.

"Recognizing Israel's right to exist," the actual demand being made of Hamas and Palestinians, is in an entirely different league. This formulation does not address diplomatic formalities or a simple acceptance of present realities. It calls for a moral judgment.

There is an enormous difference between "recognizing Israel's existence" and "recognizing Israel's right to exist." From a Palestinian perspective, the difference is in the same league as the difference between asking a Jew to acknowledge that the Holocaust happened and asking him to concede that the Holocaust was morally justified. For Palestinians to acknowledge the occurrence of the Nakba – the expulsion of the great majority of Palestinians from their homeland between 1947 and 1949 – is one thing. For them to publicly concede that it was "right" for the Nakba to have happened would be something else entirely. For the Jewish and Palestinian peoples, the Holocaust and the Nakba, respectively, represent catastrophes and injustices on an unimaginable scale that can neither be forgotten nor forgiven.

To demand that Palestinians recognize "Israel's right to exist" is to demand that a people who have been treated as subhumans unworthy of basic human rights publicly proclaim that they are subhumans. It would imply Palestinians' acceptance that they deserve what has been done and continues to be done to them. Even 19th-century US governments did not require the surviving native Americans to publicly proclaim the "rightness" of their ethnic cleansing by European colonists as a condition precedent to even discussing what sort of land reservation they might receive. Nor did native Americans have to live under economic blockade and threat of starvation until they shed whatever pride they had left and conceded the point.

Some believe that Yasser Arafat did concede the point in order to buy his ticket out of the wilderness of demonization and earn the right to be lectured directly by the Americans. But in fact, in his famous 1988 statement in Stockholm, he accepted "Israel's right to exist in peace and security." This language, significantly, addresses the conditions of existence of a state which, as a matter of fact, exists. It does not address the existential question of the "rightness" of the dispossession and dispersal of the Palestinian people from their homeland to make way for another people coming from abroad.

The original conception of the phrase "Israel's right to exist" and of its use as an excuse for not talking with any Palestinian leaders who still stood up for the rights of their people are attributed to former US Secretary of State Henry Kissinger. It is highly likely that those countries that still employ this phrase do so in full awareness of what it entails, morally and psychologically, for the Palestinian people.

However, many people of goodwill and decent values may well be taken in by the surface simplicity of the words, "Israel's right to exist," and believe that they constitute a reasonable demand. And if the "right to exist" is reasonable, then refusing to accept it must represent perversity, rather than Palestinians' deeply felt need to cling to their self-respect and dignity as full-fledged human beings. That this need is deeply felt is evidenced by polls showing that the percentage of the Palestinian population that approves of Hamas's refusal to bow to this demand substantially exceeds the percentage that voted for Hamas in January 2006.

Those who recognize the critical importance of Israeli-Palestinian peace and truly seek a decent future for both peoples must recognize that the demand that Hamas recognize "Israel's right to exist" is unreasonable, immoral, and impossible to meet. Then, they must insist that this roadblock to peace be removed, the economic siege of the Palestinian territories be lifted, and the pursuit of peace with some measure of justice be resumed with the urgency it deserves.
• John V. Whitbeck, an international lawyer, is the author of, "The World According to Whitbeck." He has advised Palestinian officials in negotiations with Israel.