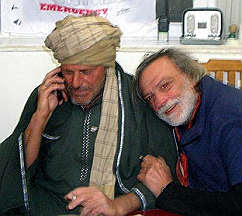 (Ansa Photo via La Repubblica) in the photo, Daniele Mastrogiacomo together with Gino Strada, quite possibly the greatest living Italian. (Please visit the site about Emergency, which has built the only hospitals of Afghanistan and has cured hundreds of thousands of people free of charge and no-questions-asked in dozens of war-torn countries and impoverished nations). Strada served as mediator and is currently hosting Daniele Mastrogiacomo in the hospital at Lashkar-gah, until his return to Rome scheduled for tomorrow.

All too often, when running a blog that concerns Palestine and the wars in the Middle East and Central Asia, there is no good news. Imagine the pure joy to learn that this afternoon, Daniele Mastrogiacomo, NON-IMBEDDED reorter, was released from his imprisonment. He was taken hostage on 4 March and spent 15 days chained in a different location each day. He claims that his interpreter was liberated. This wonderful news follows the terrible news of the killing of his driver by the Talibans who had kidnapped them on the road between Kabul and the territory that is under the rule of the Talibans.