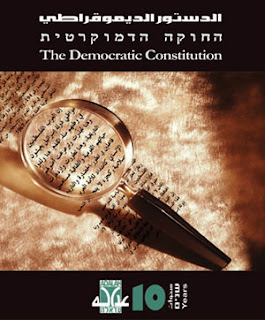 in the photo: cover to Adalah's Democratic Consitution

The board of the leaders of Druze & Cherkess* local authorities’ first reaction to “Adalah” (Justice) center for the rights of the Arab minority in “Israel”, demanding a bi-national state in “Israel” was a statement denouncing the project**.

Nabih Nasr Edine, the head of this board, attacked the project considering it “unacceptable,” because, “The state of “Israel” is a Jewish state, and it is a democratic state that calls for equality and elections, and we reject and take precautions against whatever is demanded by ‘Adalah Center’.”

It is to be noted that this board was brought into existence by the “Israeli” authorities in order to separate the Druze & Cherkess local authorities from coming under the umbrella of the Arab Higher Committee. The Zionist authorities operated segregation between the Arab councils and Druze & Cherkess councils on the basis that those who belong to these councils serve in the “Israeli” army. But this segregation did not actually grant these councils priorities, and they are still suffering as any other Arab councils from the discrimination that goes against them.

Nasr stressed on: “there is an existential co-partnership between Druze and Cherkess and the Jewish state,” which is a co-partnership that is refused by a large sector of the Druze community, especially in “The Society of the Druze Initiative” and “The free Maarofiene.” Nasr added: “This is an alliance of blood and life, and we refuse any substantive change in the character of this state with which we tied our fate before its establishment.” And in spite of this, Nasr called for the establishment of real equality, and said, “We hope that the state of Israel will deal with us better then the treatment we receive from it today”(!!!)

Notes* The Cherkess people (even called Circassians) are Caucasians who emigrated from their land in 1879 after it was taken over by the Russians (today three Republics beloging to the Russian Federation : Adygeia, Karachay-Cherkessia and Kabardino-Balkaria. The Ottomans sent them to settle the border regions of the empire and around 1880 some of them arrived to Palestine and established two villages [Kfar Kama and Rikhaniya]. In 1948 the Cherkess joined the Israelis and fought against the Palestinians.
SEE ALSO http://peacepalestine.blogspot.com/2007/02/noted-arab-citizens-call-on-israel-to.html

** On the tenth anniversary of its founding, Adalah issued the draft of a democratic Constitution for the State of israel, based on the concept of a democratic, bilingual, multicultural state.
Original : As Safir ,Beirut Arab Daily, www.assafir.com, 2 March 2007
Translated from Arabic by Adib S Kawar. URL of this article on Tlaxcala: http://www.tlaxcala.es/pp.asp?reference=2170&lg=en