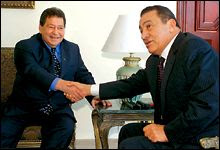 In the photo, Happy times between Ben Eliezer and Mubarak

Beirut March 2, 2007
“Israeli” daily “Yedioth Ahronoth” wrote that the “Israeli” minister of infrastructure Benjamin Ben Eliezer (former minister of defense), who is known to have close relations with Egyptian president Husni Mubarak, has become a subject of contention in Egypt, as a result of confirmation of his responsibility in the killing of 250 Egyptian soldiers in Sinai at the end of the 1967 war.

“Israeli” TV channel 1 broadcast a documentary about the “Shakid” battalion that was lead by Ben Eliezer, which committed the massacre after the Egyptian soldiers ran out of ammunition. “Yedioth” wrote that the “Israeli” minister spoke carelessly about the chasing of the unarmed Egyptian soldiers after the war came to an end, and massacred them. The same sources added that “Israel” promised Egypt to investigate the case, and submit the results to Cairo. It added that Egyptian sources complained for not being informed about the results of the investigations. On the other hand it said that Egyptian authorities asked “Israel” to do its best to cool down the case in order to calm the anger of the Egyptian people (!!!)

The Egyptian daily “Al-Ahram” reported that the members of the Egyptian parliament got furious as a result of the uncovering of the barbaric crime. Edward Ghali, head of the parliamentarian Human Rights committee called in the presence of a representative of the ministry of foreign affairs for an urgent meeting on Sunday to discuss the “Israeli” massacre that resulted in the loss of innocent Egyptians, which is considered a flagrant violation of human rights and international law.

The head of the parliamentarian Arab affairs committee, Saad Al-Jammal, confirmed that “what was uncovered, the massacre of unarmed soldiers“ explains its (Israel’s) lack of respect of the rules of war and prisoners of war.” He insisted that, “such a crime should not pass without punishment.”

Mustapha Al-Faqi, head of the foreign affairs committee condemned the “Israeli massacre”, and added that “this is not the first time that “Israelis” leak such disgusting spectacles, which confirms that Israeli hands are stained with Egyptian blood.”

M.K. Azmi Bishara, published a statement in February 2001 saying that Ben Eliezer, “was a deputy commander of the Shakid battalion that committed a massacre against at least 250 Egyptian and Palestinian prisoners of war after the end of the 1967 war near Al-Arish.”

Translated from Arabic by Adib S Kawar. The original appeared in the 2 March edition of Assafir Beirut Arab Daily, www.assafir.com