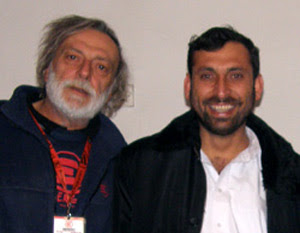 Gino Strada: without guarantees for Rahmatullah, we will reconsider our presence in Kabul
In the photo: Gino Strada with Rahmatullah Hanefi

The head surgeon of the Non-government Organisation raises a sound of alarm for the mediator: “He’s been transferred into a jail in the Capital”

ROME – He has returned to Italy, but his thoughts still turn to Kabul. He is worried about his friend Rahmatullah and he wants him to be liberated immediately. “And, instead we have come to find out just now that he’s been transferred into one of the three prisons of the Afghan Capital,” Gino Strada says, the surgeon who ten days ago brought Daniele Mastrogiacomo safely home. He is expected at the march that should be large this Saturday in Rome at Piazza Navona. He is especially awaiting a signal from the government of Kabul for the release of the head of staff of the Emergency hospital at Laskar Gah.

When was Rahmatullah Hanefi brought to the jails of the Afghani Capital?

“From what we know, Wednesday afternoon he was brought by a convoy of vehicles of the NSD, the Afghani secret services. We have asked to be able to see him, one of our representatives at Kabul tried this morning, without any success: they would not let him meet him. I know that tomorrow Ettore Sequi, the Italian ambassador, will ask officially for a visit with him.

Will Emergency try again to see him or to speak with him?

“Of course, starting tomorrow. Among other things, the Minister of Justice of Afghanistan signed a precise agreement with us: there is a protocol that foresees that all of those in the Afghani hospitals are visited by our doctors at the moment of their entrance into penitentiary. All of the prisoners, no one excluded. But in this case, they are violating the protocol. And then, paradoxically, really, right in this prison of Kabul, Emergency has one of its clinics. In this way, the position of Emergency is up for scrutiny. If this is how things are going to continue, we will be forced to revise our plans in Afghanistan. Certainly, we won’t close the hospitals. But there is going to be reconsideration of Emergency there if we don’t have the guarantees of operating in serenity.”

But the government truly wants you there…

“I repeat: we are not going to leave, perhaps we will have to make some changes.”

How much time do you expect it to take until the position of Rahmatullah is clear, to know why he as taken away by the secret services at dawn on 20 March?

Who wanted that, in your view?

“The other day, I spoke for a long time with the Afghani Minister of Health, Amin Fatimie. It was an official meeting, the ambassador Sequi was there as well. Would you like to know what the Minister told me? He said that he couldn’t understand perfectly what was happening, that there was something that was not very clear, that there were – and I quote him – invisible hands that were moving things. There may also be invisible hands, but the uniforms that those persons were wearing were quite visible and quite recognisable: they are those of the Afghani secret services, the NSD. Another paradox of this case: Rahmatullah was already arrested in 2001 by the Taleban religious police. Four months of prison was what he had to go through, and to release him, strong intervention and pressure was required. Then the Talebans kept him in all that time, now he’s been jailed again, but for the opposite reasons.

Has Emergency got any information on what has become of Adjmal Nashkbandi, the interpreter of Daniele, captured together with him at Helmand?

“Unfortunately, we are unaware of any news there. The only person who could give us some was Rahmatullah, and now he’s in prison…”

What do you make of the announcement made by Mullah Dadullah at Sky News 24? Was it recorded before the liberation of Daniele, or afterwards?

“I don’t have the elements to establish exactly when Dadullah spoke. But, there is something very anomalous in that message, or at the very least, something new. He has never recognised the Karzai government, and now he says that they have to deal with him in order to release Adjmal. He says that the Afghani government has to speak with him and they have to free the two Talibans that have been requested.”

Mullah Dudallah, in his interview, repeats the idea of his of journalist-spies, on those others who do not recount everything that they’ve seen down in Afghanistan…

“In our hospitals in the past few weeks, there has been a terrifying number of civilian victims. The huge offensive of the NATO in the southern provinces of the country seems to be ignored by everyone. There are so many dead, there are so many wounded.”

“Adjmal and Rahmat: their freedom is my own”

I am worried, in anguish and afflicted for the fate of Adjmal Nashkbandi and Rahmatullah Hanefi. They are two friends, two men to whom I am linked in an unbreakable bond. Adjmal was my interpreter and had lived through the same prisons with me for two weeks, an imprisonment that has worn us down psychologically and physically, and that we are continuing to suffer. He has seen, just as I have, the assassination of our driver Sayed Agha. I saw them free him from his chains, then I saw them take him away in another convoy. Now I discover, with bitterness, that he is still in the hands of the Talibans. The agreement that was reached, or so our kidnappers told us, foresaw the freedom of both of us. In the same way and at the same time. It was not that way.

Rahmatullah was the person who saved my life, who came to get me, in person, in the deep south of Afghanistan. He is a man of peace, he works for Emergency, a humanitarian organisation. He served a role that was unbiased, he was a mediator. We know that he is being held in some structure of the Afghani police, that he is being interrogated, that no independent organisation, no official authority, has been allowed to meet him. We have no news of his conditions. We don’t know where he is being imprisoned. It is a tragic, unjust reality that is causing me anxiety. Rahmatullah and Adjmal have to be freed immediately. I make an appeal to the government and parliament of Afghanistan, to the president Hamid Karzai, to the United Nations, to the UNAMA, to all the western embassies present at Kabul, to the non-governmental organisations that have been active in Afghanistan for years, so that they mobilise and use any influence they might have, acting in every possible seat, in order to bring Adjmal and Rahmatullah back home. Their freedom is my own.
Translated from Italian by Mary Rizzo for peacepalestine and Tlaxcala.