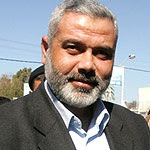 HANIYEH: "THE EUROPEAN EMBARGO WILL CEASE; MANY MINISTERS ARE READY TO MEET WITH ME"

GAZA—Until a few days ago, the bare, ground-floor room doubled both as entrance and as “camping” room for anyone who had something to ask from the Prime Minister. Now the workers are at work: blue carpeting, emblems on the walls, the Palestinian flag.

Here, Ismail Haniyeh wants to appear before the photographers for the official handshakes with foreign guests. Prime Minister Haniyeh looks confident about the European envoys’ arrival to Gaza to speak to him, after more than one year of political and economic embargo. The wet paint and his smiles framed by an Islamic beard reveal it.

“I met with the Norwegian Foreign deputy-Minister and received a phone call from your Foreign Affairs Under-Secretary, Vittorio Craxi. These are two very important signs. We regard the contacts with the Italians as a great step towards the end of the international siege. The Foreign Minister, Massimo D’Alema, was about to go to Washington, so I suggested to Craxi that Italy brings a message to the American administration: this government is interested in dialogue with the US and Europe. America must look at the half-full part of the glass, not at the half-empty one. Craxi assured me about his dedication towards the ending of the embargo.”

Dressed in a blue suit and grey shirt, Haniyeh, 44, behaves in the simple way of the same man whom the people at Shati refugee camp still go on calling Abu Abed: the neighbour ready to furnish electricity from his own generator or to attend weddings and funerals. An image that has made him the most popular Palestinian politician (22% against Mahmoud Abbas’ 19%, according to a recent poll.)

Hamas hard-liners have blamed the newly born national unity government while Said Siam, former Minster of the Interior, who has been excluded from the executive, threatens that “no leader from the movement will ever recognize Israel, we will never betray our values.” During the interview, the first one since he took office again through the new mandate, Haniyeh repeats he is speaking on the government’s behalf rather than in name of the religious extremist movement, of which he is one of the leaders. In his answers, he refers several times to the political platform that was agreed by all the factions on 8 February in Mecca, an agreement that has been reached after months of negotiations (and bitter military fights) with Fatah. The document doesn’t speak about recognizing the Jewish state, as required by the international community, but only of “respect” for the accords that were signed by the PLO in the past.

The EU has confirmed its positions and requests. Have either you or President Abbas been assured that the embargo will be called off?

“There are important signs. France invited Foreign Minister Ziad Abu Amr and we know that some European Foreign Ministers are ready to come to the Gaza Strip in order to meet with me and other Ministers.”

“It’s too early to say it publicly.”

Condoleezza Rice, American Secretary of State, declared: “In his speech, Haniyeh hinted at the right of resistance in all of its forms. It doesn’t sound very good.”

“The resistance is recalled also in our platform, as being legitimate and guaranteed by the international conventions. We’re still under occupation and we have the right to defend and protect ourselves until the occupation of our land ends. We’re interested in extending the truce to the West Bank as well. Likewise, any aggression must stop. Now the ball is in Israel’s court.”

You’re speaking about extending the truce, yet a sniper from Gaza shot at and wounded a worker on Israeli soil just last Monday. Hamas has claimed responsibility for the attack, for the first time since the ceasefire started.

“In our capacity as government, we have no information or detail concerning the attack.”

Jacob Walles, American consul in Jerusalem, met with Salam Fayyad, Palestinian Minister of Finance, who is an independent.

“Washington must talk to all the Ministers, as this is the government of the Palestinian people. We don’t oppose opening channels with some of them but we reject a political tack which makes distinctions between the Ministers.”

What did you talk about during the government’s first session on Sunday?

“We agreed upon how very important it is to focus on internal security (author’s note: 90 dead in the clashes between factions from December to February). We demanded the Minister of the Interior to come up with a plan that may tackle the situation. The other Ministers are going to arrange an action program for the first hundred days as well.”

Hamas has slated Mohammed Dahlan’s appointment as Mahmoud Abbas’ Advisor for National Security. Apparently, the unity with Fatah hasn’t been achieved over every point.

“The President assured me that the office hasn’t been officially entrusted yet. It’s still being discussed…I will deal with the matter face to face with Mahmoud Abbas. We’ll confront any controversial question through dialogue.”

Is Hamas willing to let the President freely negotiate with Israel?

“As we decided with the common platform, Mahmoud Abbas bears political responsibility for the negotiations. Any accord will have to be ratified by the Parliament’s vote, or else be submitted to a popular referendum which all the Palestinians will take part in, the refugees in exile as well.”

Are you ready to accept an ultimate agreement?

“The agenda defines our goals very clearly: we mean to establish an independent and sovereign Palestinian state within the 1967 borders, with Jerusalem as capital, besides the refugees’ right to return and the releasing of all the Palestinian prisoners. These are our demands; the point is whether Israel is ready or not.”

Do you consider the Arab League’s initiative a basis for the negotiations?

“It’s the Israelis who have problems with the Arab brothers’ proposal, not the Palestinians.”

In early March, the Minister of Education decided to call in from schools and burn a children’s popular storybook, as being considered offensive to Islamic principles. The decision was cancelled due to the protests, yet a part of the Palestinian society fears that Hamas wants to impose fundamentalist laws.

“There is no fear for Hamas’ decisions. It’s about distortions. We are founded on Palestinian culture and traditions and in that book there are unbearable passages for our ethics. We aren’t against all the stories.”