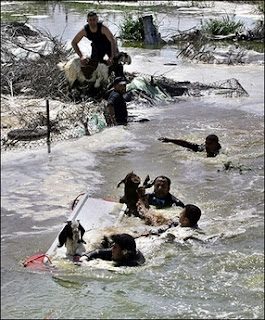 Tsunami in Gaza, Celebration of peace in Jerusalem

US Secretary of State Condoleezza Rice announced yesterday the decision of Prime Minister Ehud Olmert and Palestinian Authority Chairman, Mahmoud Abbas to meet bi-weekly with the US mediating. Indeed ‘great news for the Palestinians and the Israelis’.

More or less at the same time at least five Palestinians drowned in a “sewage Tsunami” when a water treatment reservoir burst, flooding Umm Naser, a village in the northern Gaza Strip.

While in a peaceful news conference in Jerusalem Rice once again said NO to the democratically elected Hamas referring to the PA chairman as a “partner for peace”, a Bedouin village in Gaza was submerged in sewage.

This devastating picture of total surreal detachment between the two events, between a meaningless political intercourse and a devastating destruction on the ground is the true reality of the Palestinian disaster. This reflects upon the zero Western political leadership’s commitment to humanist and ethical thinking, it reflects upon our abandonment of the Palestinian people, it is a reminder of our general negligence towards people who are mercilessly dispossessed for six decades, our blindness towards what seems to be a suffering with no end and no limit.

Rice called on regional Arab states to “participate actively in the peace process”. She welcomed as well the Saudi peace plan as “an example of such new thinking.” And I end up asking myself when was the last time Rice or the Saudi Crown family had been submerged in Sewage? Rice probably failed to realise that people, who happen to be flooded by ‘treated water’, want something slightly more significant than a mere ‘peace process’. Ms Rice, shouldn’t we better start with food? In case you didn’t realise, your embargo on the Hamas government has led to unprecedented starvation in Gaza. Some 80% of Gaza’s population relies upon WFP’s aid and on that from the UNRWA, the UN agency for refugees.

More or less by the time the US Secretary of State concluded that the two leaders would discuss a “political horizon,” it was clear that dozens of residents of Umm Naser were still unaccounted for.

By late afternoon, receding floodwaters had left a foul-smelling muck. Village children clung to wooden doors floating on the putrid waters. Rescuers were paddling through the village searching for victims. Frantic goats and cows were seen swimming in the mud searching for safe ground.

By the time Rice left the region it was revealed that the ‘negotiations’ between Ehud Olmert and Mahmoud Abbas will not include the three core issues - Jerusalem, refugees and borders. How surprising.

Instead of going from Jerusalem to Riyadh, Rice went back to Washington. She realised that she had nothing to offer the Arab leaders summit. She has nothing to offer almost as much as the people of Umm Naser have nothing to lose.