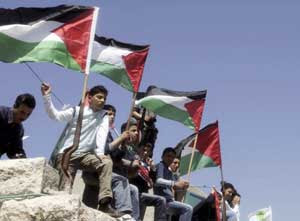 Today we commemorate Land Day March 30th to protest the continued Israeli process of land confiscation and other tools of ethnic cleansing (background and resources at Stop the Wall ). More people are waking up to the reality of the historical and ongoing injustice inflicted on the Palestinian people. Even more people are beginning to realize the centrality of this issue in the instability and mayhem that extended from Lebanon to Iraq, Iran and beyond. Elites and oppressors like Condi Rice are trying to keep the so called "peace process" alive (which is status quo) while they continue to murder any possibility of real peace. They sweep under the rug their own complicity in war crimes and crimes against humanity.

But humanity refuses to surrender and I am always amazed first at the resilience, adaptability, and amazing spirit of our people. I am also amazed at the refusal of so many people to play their assigned roles of passive consumers (consumers of products and consumers of propaganda).

The Republican neocons and their Democratic allies in Congress (the leadership of the Democratic party that is beholden to AIPAC) continue to delude themselves that they can shape Western Asia to their (i.e. Israel's) liking. This despite their massive failure in Lebanon, in Iraq, and in Palestine. This despite the accelerating disintegration of Israeli society that stretched from the Defense minister who sold his stock holdings just before ordering the attack on Lebanon to sex scandals and financial corruption involving its key elite leaders. This despite the failure of a Zionist manipulated shrieking media (CNN, Fox etc) in convincing enough Americans (let alone the rest of the world) that the Bush "war on terror" is anything but a scam to profit special interests. This despite the fact that US failing policies profited those they tried to target (look at how Iran profited from the rising oil prices and the mayhem created by the US occupation of Iraq and Afghanistan).

Under the radar, countries from Venezuela to China to Dubai to Iran are dumping the US dollar whose value will continue to decline against the Euro and the Yen. Even the king of Saudi Arabia (Abdullah Al-Saud whose regime would not last without US support) for the first time spoke publicly that "the US occupation of Iraq" (his words) causes violence and must be ended. This despite the fact that as the Zionists target Muslims, hundreds of new mosques are being established in America and Islam is the fastest growing religion in the world (and of course many people are bridging religions and cultures, intermarriage is at an all time high and accelerating). This despite the fact that hundreds of new organizations for solidarity with Palestinian rights are also being established around the world and more people of all faiths are becoming aware of the injustices and demanding human rights (a win-win outcome for ALL people). The most optimistic thing is that activism is flourishing and apathy is receding around the world.