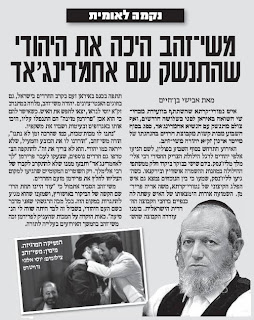 by Miguel Martinez
including Gilad Atzmon's translation of the Ma'ariv article .

An Orthodox rabbi violently assaulted and stripped of his clothes near Auschwitz, in front of the Polish police, who simply stand by without doing anything.

Yet the story was not considered newsworthy.

Because the victim of the assault was the anti-Zionist rabbi, Moishe Aryeh Friedman, who had already suffered a less violent attack in Italy a few months ago (for a press review in Italian, see the September 2006 posts in the Salamlik blog).

Friedman, together with a small group of Satmar Jews, had gone privately to a town near Auschwitz to commemorate a rabbi of their community.

He was recognised and beaten up by a group of Israelis. The leader of the group, Yehuda Meshi-Zahav, who returned to Israel without even being questioned by the Polish police, boasted:

"We gave him a good beating, the kind we have not given in a long time. We took off his coat and hat, so he would not look like a Jew."

As the article published in Ma'ariv and translated below says, Yehuda Meshi-Zahav was rewarded with a special reading of the Torah in a synagogue.

I have had the honour of meeting Moishe Arye Friedman - a shy, soft-spoken and incredibly courageous gentlemen who seems to have come directly out of the Austro-Hungarian empire. The thought that came to my mind was, here is the Master of the Unutterable, the person who says what nobody dares or is allowed to say.

All kinds of things have been said about him: he was in a hotel in New York together with his wife, when the newspapers told the world that his wife, and the mother of their seven children, had "left him because of his anti-Zionism".

Friedman has even been accused of being a "Holocaust denier", because he recently attended a conference in Iran.

This is doubly false.

Friedman, very simply, said that the holocaust took place "because we lived through it," and he also said it clearly during the Tehran conference.

Second, and this is a more subtle but important point, there never was a "holocaust denial conference" in Iran.

Let us remember how the story began, something the media carefully avoids doing.

The Iranian President, Ahmadi Nejad, replied, tongue in cheek, by saying that there was something in the West where freedom of expression was not absolute: the holocaust.

So he pulled off a kind of stunt on the West: Iran was the only country where some Europeans, persecuted solely because of what they write and say, could meet and discuss freely. So he hosted a conference where revisionists, or holocaust deniers, could say what they wanted. Without Iran taking an official stand on the issue.

Friedman, has also been presented as an "anti-Semite" or, as usual, as a "Self-Hating Jew".

This accusation is totally false.

Friedman is a traditionalist. A man who lives in a totally religious dimension, something utterly incomprehensible to the average secular liberal of the West.

However, to understand religious anti-Zionism, one need only imagine a similar situation in a Catholic context.

It is hard to say what Catholicism is today.

But if we take a catechism written a century ago, we can find very clear definitions. A Catholic is a person who, through faith, works and sacraments administered according to very strict rules, and hoping for grace, tries to achieve eternal contemplation of God after death.

Imagine if one day, a Pope woke up and announced that every Catholic is free to believe in whatever he likes, that religious faith was a burden which had made Catholics passive and left them lagging behind everybody else, and that the real purpose of the Church was to restore the Holy Roman Empire and turn it into a nuclear arsenal, able to keep Communists and Muslims at bay forever.

Any devout Catholic would consider such a shocking event the greatest danger ever incurred by the Church. No outside persecution could compare remotely to this inside danger. So it would be the first duty of every Catholic to try to destroy the reborn Holy Roman Empire.

Today, Friedman holds a minority position. However, in the past, his stand was that of the great majority of the rabbis of Eastern Europe, right up to the Nazi genocide. And it is still the stand of a surprisingly large sector of the Orthodox community, although not many people are aware of this, due to the difficulty that any traditionalist and intellectually self-sufficient community has communicating with the outside world.

In the view of Orthodox anti-Zionists, Judaism means being a "people of priests", who must live differently from every other people, enacting the complex called the "Torah": not just the Book through which Eternity spoke to a fleeting world, but all the comments on the book, the rules deduced from the book, a lifestyle which permeates every gesture and moment of life, and brings divinity into the world.

Such a diversity certainly frightened and shocked many in the past, as happens today when we see bearded Imams who do not shake women's hands or eat ham. But this diversity is fully compatible with a kind of detached cohabitation with other human beings, since its focus is on the sacred and not on politics.

A Judaism without God and without the Torah, say the anti-Zionist Jews, has no more meaning than an association of former priests who have become atheists.

Without God and without the Torah, Jewishness turns into a "culture", consisting of kitchen recipes (whose religious foundations have however been lost); and without the Torah and the positive force it meant, the history of the Jews becomes simply self pity over what "other people did to us".

Zionism, for the traditionalist Jews, appeared as a call on all Jews to cast off the Torah and devote themselves to politics and war. It was no longer God and his rules who kept the community together, but a racial myth, which turned the Biblical archetypes into military heroes, and which transformed earthly borders into idols to be worshipped, and for which to shed blood - both one's own and that of others.

Indeed, the anti-Zionist Jews say, Herzl's stated mission was to free the Jews from Judaism, which he considered to be something of a perversion of the spirit. But to put an end to Jews as such, turning them into Gentiles "like everybody else", means committing spiritual genocide.

For anti-Zionist Jews, therefore, Israel is the true holocaust, the true exterminator of Jews, guilty of the spiritual death of a greater share of the people than the one that suffered a physical death during World War II.

This is why the "remnant of Israel", large or small as it may be, must resist.

To resist, Friedman and the other rabbis of his community have chosen to bear witness everywhere of two simple notions: what Israel does is not the fault of Judaism; and Israel is the denial and main enemy of Judaism. "Bear witness everywhere" means everywhere. Friedman, as we said before, is no liberal pacifist, who chooses where to speak on the basis of cautious calculations of political correctness.

Wherever a door opens, he does what he believes is his absolute religious duty: bearing witness, that Israel is the denial of Judaism.

This is of course the best reply to those who are worried that "anti-Zionism may serve as a disguise for anti-Semitism".

Of course, not many people have the courage to open their doors to Rav Friedman.

Those who do are often people far from the flow of the Great Politically Correct Discourse. It is easy, therefore, to show that Friedman has had "contacts" with these people or those, with rightists or leftists or Muslims.

Actually, Friedman couldn't care less about any slander by proxy that witch hunters may make.

Concerning religious anti-Zionism, the fundamental book to read is by prof. Yakov M. Rabkin of the University of Montreal, A Threat from Within: A Century of Jewish Opposition to Zionism.


The following article is from Ma'ariv (with a picture of the original). Translation by Gilad Atzmon.

Meshi Zah’hav has beaten the Jew who kissed Ahmadinejad

A man from Neturei Karta who participated in the holocaust denial conference three months ago, and was photographed kissing Iranian president Ahmadinejad, was heavily beaten by a group of orthodox Jews led by the founder of ZKA [Translator's note: it is a group of Rabbis that specialises in collecting and tracing remains of Jewish bodies after suicidal attacks] Rabbi Yehuda Meshi Zah’hav.

The event took place last week in Poland where thousands of Jews gathered to celebrate the fest of Hasidic Zadik Rabbi Elimelech of Lizsensk. On Friday some of the participants visited the Auschwitz and Birkenau death camps. When they returned to Lizsensk they learned that amongst the participants in the fest was one Moshe Arye Friedman of Neturei Karta. The gossip spread quickly amongst the Israeli orthodox group. At the time, the Israeli orthodox participants were very outraged with Neturei Karta for participating in the conference and this includes the anti-Zionists as well. Yehuda Meshi Zah’hav, accompanied by a ZKA volunteer, went to search for the man. Once they found him and he confirmed that he was indeed Friedman from Vienna, they attacked him, punched him, kicked him and smashed his glasses.

“We gave him some real punches,” Meshi Zah’hav confessed, “we took off his hat and Caftan so he wouldn’t look like a Jew, he didn’t need it.” Other Hasidic Jews joined in the assault. They all shouted, “Go to Ahmadinejad.” They insisted as well that Friedman would not get near Rabbi Elimelech’s grave. Local policemen who intervened managed to rescue Friedman [translator's note: other eyewitnesses say that the police did not intervene].

Meshi Zah’hav explained yesterday, “We were still under the impression of Auschwitz, and we heard that he was coming to tease us, every punch I gave him, I felt that I was speaking in the name of the Jewish people, that alone made the journey worthwhile.” As a prize for beating up Friedman Meshi Zah’hav was granted with Aliyah La Torah (elevating the Torah).
An italian version of this piece is available at Kelebek.