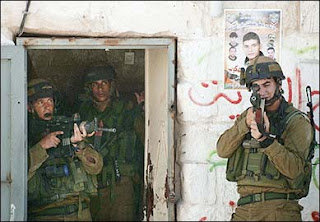 The operation has been launched a day after the Israeli military authority announced that an investigation will be undertaken into reports of the Israeli army using Palestinians as human shields in the previous incursion of Nablus last month. See the full report

And finally, a new interview conducted with the injured son of the "martyr" 'Anan al-Tibi in the aftermath of operation "Hot Winter" in Nablus, Occupied Palestine was released.

In the end of February 2007, the Israeli Occupation Forces (IOF) launched a major military operation in Nablus' Old City. During the invasion, on February 26th, 'Anan Mohammad al-Tibi (49) was killed by IOF-troops as he was standing on his roof in the Yasmine neighborhood. His son Ashraf (20) was also shot in the same spot, but survived. This interview was conducted with Ashraf al-Tibi on Thursday, March 1, 2007 at his hospital bed. Watch the Interview