Pain Ray - "With Pain You Shall Protest" 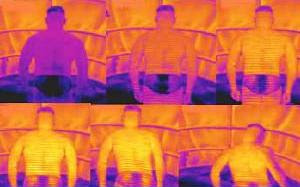 The paradox of the harmless weapon that can change democracy.
by Mario Sanna, Angelo Saso, Maurizio Torrealta of RaiNews24
This report analyzes the risks connected with the non-lethal weapon "Active Denial System" also known as the "pain ray", a ray made of microwaves that launches an impulse of a few nanoseconds 1000 meters away. The ray excites the pain receptors of the human body, causing an unbearable feeling of pain, without leaving any evident mark. This system of non-lethal weapon has been presented by the Interforces Directorate for non-lethal weapons of the Pentagon last January 24. British researchers interviewed by Rainews24 warn: this weapon could modify the liberty to freely express one's disagreement. The invisibility and the absence of visible marks on the people hit would make impossible any legal responsability in the case of improper use of this arm.

The researchers that have been interviewed have doubt about the non-leathal feature of the "pain ray", there are not sufficient biological data on the medium and long term and on the consequences it can have on the central nervous system, on eyes and other body parts.

The people we talked to always mention another non-lethal weapon: "Taser", a device that anyone can buy on the internet and that can be considered a smaller relative of the "pain ray". It can give an electrical shock of 50 thousand volts for 5 seconds at a distance of a few meters.

This report contains one of the many shocking videos, that can be found on the web, that shows the images of a young boy hit by an electroshock caused by Taser only because he refused to show his student card. The possible scenario shows a change in the form of power that might have an impact on democratic rules if this system is not regulated to protect human rights in the best way possible. One of the people interviewed suspects that the testing of this weapon has been given out by contract to those countries where the protection of civil rights has lower standards than the European countries and the United States.

The possibility that these weapons, that are very expensive at the moment, in the future could be available on the free market, worries very much those people who want to keep high the level of freedom and democratic expression in their own countries.

A most incredible statement was made that the films shown by the Defense Department at the Pentagon were identical to those of the Russians. This brings to mind some very disturbing reflections as to the actual long-term effects of the weapons and the conviction that to test them, human rights provisions and health protection laws would need to be violated. Legal ramifications are also explored in this document. It is a must see!!
WATCH THE VIDEO! or here
and read the very interesting link from Defense Tech.org
also, see the other extremely important and interesting investigative films from RaiNews24, absolutely the best investigative reporters around today in any country. Many of their documents are groundbreaking and quite worth viewing. (Today one on Palestinian Refugees caught between Iraq and Syria was supposed to be aired, but it was not. So, keep your eyes on that site! See the sidebar on the right for the listing of films in English.)