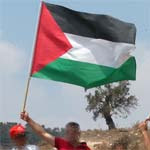 GROWING UP in a Palestinian refugee camp in the Gaza Strip, it was a very familiar encounter: Israeli soldiers storming our house accompanied by shouts of terror and a barrage of insults. Such recollections make me shudder to this day. On frequent raids, as soldiers pounded on our door demanding entry, my father would always ask in a trembling voice, “Who is it”. The answer was always the same; “Yahoud” they would say.

So naturally, I grew up making the association between “Yahoud,” the Arabic word for “Jews”, and the horror my family and I had experienced. When my cousin Wael was shot dead in his teenage years, while on his way to study with me — it was the “Yahoud” who killed him. When my childhood friend Raed Munis was shot repeatedly as he dug a grave for a neighbor of ours, shot just an hour earlier, he was killed by the “Yahoud”. When my mother was struck in the chest repeatedly by the butt of an Israeli soldier’s machine gun, a beating that led to her untimely death 50 days later, that too was carried out by the “Yahoud”.

Every inch of land that was stolen from Palestinians in the last 40 years of occupation was done in the name of the “Yahoud” and their security; every settlement erected on a poor Palestinian farmer’s orchard, every life that was taken, every brick of every wall that was built and continues to be constructed over confiscated Palestinian land in defiance of international law was also done in the name of the “Yahoud”. Palestinians, thus — most Arabs and Muslims and others as well — hold the “Yahoud” responsible for their plight, not out of their ingrained and inherent anti-Semitism, as some so shrewdly or naively choose to believe, but because on the basis of its Jewishness Israel has excused all of its inexcusable actions. If someone is to blame for this, it is Israel, not its detractors. It’s as simple as that.

But, of course, it’s not always as simple as that. When I moved to the US, I realized, correctly that the term “Yahoud” is not befitting, for the old connotations of the name cannot be accepted in Western societies where Jews have historically been a recurring victim, and where a large number of activists and fellow writers, of which many became close friends of mine are also Jewish. A distinction between a Jew and a Zionist was indeed an imperative, though not always easy, for Israel extorts much needed financial, political, moral and other forms of support relying primarily on Jewish constituents in North America and Western Europe. Many of the latter demonstrate their allegiance to Israel in more ways than one can recall. Unfortunately, in the minds of many, being Jewish requires one to unquestionably support the “Jewish State”. Most publications that define themselves as Jewish in the Western hemisphere seem more absorbed by Israeli politics, Israel’s security, and so forth, than engaged in their own political and cultural realms. The relationship has in fact become so blurred that it’s becoming nearly impossible and most confounding to set apart the anti-occupation activist from the anti-Zionist from the anti-Semitic.
However, instead of confronting the Zionist scheme that has brought such untold harm to the image of one of the greatest and oldest monotheistic faiths by holding Israel and its associates to account, there is a growing and alarming trend where members of the peace and justice movement have themselves fallen into the ominous trap: Engaging in most ruinous and consuming scuffles, isolating members and entire groups for allegedly being anti-Semitic. While taking a moral stance against racism in all of its forms is a requisite for any genuine peace and justice activist, the intense debate in some instances is reaching such grievous points that is threatening to tear apart the peace and justice movement.

A most notable example is the quarrel in the United Kingdom between members of Jews against Zionism and those of Deir Yassin Remembered; the former, accusing members of the latter of anti-Semitism, is endorsing a motion at an upcoming conference of the Palestine Solidarity Campaign that would ostracize the Deir Yassin group from the peace and justice movement. Members of both groups have spoken out strongly against the maltreatment of Palestinians in the past and both have a lot to offer PSC and its various activities. However, the motion and the entire episode is a continuation of an alarming trend that began in the US several years ago, and has consumed activists, distracting them from the real fight. It also ought to be noted that as far as Israel is concerned, any criticism of its occupation of the West Bank, no matter how polite or subtle, is an unforgivable form of anti-Semitism; thus there is no need for any member of the peace and justice movement to exasperate the Israeli witch hunt. Indeed, Israel is more than capable of prolonging such campaigns on its own.
There are many Palestinian children who are still huddling inside their homes in fear of the encroaching tanks and the hordes of unforgiving soldiers, who continue to commit untold atrocities in the name of the “Jewish State”. It’s those depraved individuals and the government that has assigned them to their vile mission, who deserve to be isolated and labeled; it’s Israel who must be held to account, by Jewish and non-Jewish individuals and groups alike, to end its exploitation of the Jewish people and their religion.
According to the World Food Program (WFP) forty-six percent of Palestinians in the Occupied Territories are food insecure; the Israeli wall is snaking around the West Bank at an astonishing speed; human rights violations are committed against vulnerable Palestinians with impunity in broad daylight with tacit or explicit support from various Western countries led by the United States.
There is no time to be wasted: All energies must be channeled in so prudent a way to stop Israel’s inhumane treatment of the Palestinians and to end the occupation. I plead to all of you, to work for peace, to redress injustice or at least to do nothing that would jeopardize the work of the peace and justice movement, either in Britain or anywhere else.