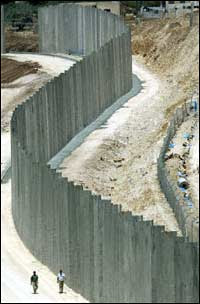 from the Palestine Chronicle (thanks to Les for the hat tip!)

Indifference is the essence of inhumanity; it is worse than hatred precisely because it does not recognize the living, breathing brother and sister who suffers the agony inflicted on them by a people who proclaim to be civilized even as they inflict bestial and barbaric acts on the helpless.

“The worst sin towards our fellow creatures is not to hate them, but to be indifferent to them; that’s the essence of inhumanity.” -- (George Bernard Shaw, The Devil’s Disciple, ACT II)

Terrorists struck once again in Jenin this past week killing four, wounding twenty-eight civilians, including two journalists and four children and women. Fifty-five civilians were kidnapped including six children. Three buildings used for agriculture were destroyed and 199 donums of agricultural land confiscated. Other attacks occurred in Far’oun village where six homes were demolished that stood too close to the Wall. Terrorists beat civilians in Bal’ein village, west of Ramallah who were protesting the demolitions and the extension of the Wall. The attacks continue, unreported in the United States since they are carried out by our allies, the Israeli Defense Forces.

Despite the deafening silence that accompanies the on-going construction of the illegal Wall, declared such by the International Court of Justice, despite staged non violent demonstrations in Bal’ein, Jayous, Bethlehem, Ramallah’s Bil’in village and elsewhere through out the West Bank, despite the outcry this week raised by Sinn Fein’s International Affairs spokesperson, Aengus O Snodeigh against the mounting atrocities committed by the Jews on the Palestinians, those who have a conscience, both international and Israeli, stand in the streets chanting and singing that the wall will fall and freedom will come to the Palestinian people. But no one listens. Instead, “a large contingent of Israeli forces, including soldiers, police and border guards, began assaulting the nonviolent demonstrators with rifle butts and truncheons.” (Palestinian Center for Human Rights, 22-24 February, 2007).

Indifference, Shaw tells us, is the essence of inhumanity; it is worse than hatred precisely because it does not recognize the living, breathing brother and sister who suffers the agony inflicted on them by a people who proclaim to be civilized even as they inflict bestial and barbaric acts on the helpless. That makes the citizens of the world worse sinners than the IDF and the Jews in Israel who tolerate the racist hatred that drives their government. Indifference costs nothing, requires no judgment, raises no principles, imposes no action, causes no discomfort; it is the void that rests in a soul that cares only for self and nothing for its fellow man. It is the beast that John describes in The Secret Book (11:4-5): “The rulers brought Adam into the shadow of death so that they might produce a figure again, but now from earth, water, fire, and the spirit that comes from matter, that is, from the ignorance of darkness, and desire, and their own contrary spirit. This figure is the tomb, the newly created body that these criminals put on the human as a fetter of forgetfulness.” The indifferent finds recourse in all that satisfies self, all that pleases the body – drink, food, pandering – and all that pleases the desires – gold, silver, presents – and so isolates self from the world that might disturb that absorption lost in forgetfulness. Should that isolated world be threatened, the fear aroused against such a person – terror, servility, anguish and shame – locks them in even more.

That fear can be triggered by those in power. It is a tool used to control the conscience of a people. Arthur Miller wrote about it in The Crucible, a play about the Salem witch trials of 1692. Citizens threatened by fear for self, even in the form of invisible forces determined to exist by their ministers, blindly accept what they cannot know and become accomplices to the criminal acts of their leaders. They have literally turned their individual consciences over to their government. That is the case in Israel. The Wall is the visible icon of an invisible threat created by Sharon’s administration to accomplish a political end, the confiscation of Palestinian land and the psychological death of the Palestinian people. The Wall is built of fear in order to engender fear in both the Israelis who see themselves as victims once more, and in the Palestinians who see themselves entombed, without hope, without compassion, without justice. Indeed, the Wall rises in all its grotesque greyness like the cement box into which a coffin is placed, and in its image casts a pall over the people of Palestine that suffocates their spirit even as it separates brothers from sisters, children from parents, friends from families, making impossible a normal life. How can one people inflict such heinous conditions on another? How can the people of America sit idly by while their representatives cow-tow to the dictates of AIPAC and the world looks on in disbelief. What has become of the America that cares for the tired and the poor?

Consider what Sharon and now Olmert have constructed. The Wall rests entirely within Palestine while it snakes over hills and valleys, down the middle of streets, carves towns and villages into parts separating people who have lived together for decades, centuries even, confiscates to the Israeli side the aquifers and wells belonging to the people of Palestine, as well as the olive groves and crops belonging to the people, and the arable land that will become the settlers fields and additional settlements for those who never lived a day in Palestine and have no history here, no memories, no culture that is indigenous if two thousand years is considered a measure. Completely surrounded, without access to their fields or mosques or friends or hospitals or employment, they have but two choices, leave or die. They are indeed buried alive by the Jews, a fate less absolute than the gas chamber since they can choose to leave, and leave behind two thousand years of history and land that has given life to generations of family embodied in 1000 year old olive trees summarily ripped from the ground by Israeli bulldozers, leave mosques in which they have worshiped decade upon decade, and leave their memories as those driven from their homes in 1947 lost theirs when their towns were razed and all that had been was no more.

Or they die; a living death that drags on day after day in poverty and need, dependent on those not indifferent to their plight: Israelis that have not capitulated to the wanton waste of human life because they know what victim hood is and recognize it; friends from all countries of the world who care enough to come as witnesses to the humiliation, the degradation, the racism that permeates the settlers and is embodied in the Israeli government; Jews from around the world who decry the inhumanity inflicted by their own on another; and Americans who care because they have faced the same threatened fear that enabled a corrupt and amoral administration to invade and occupy countries against international law. That is their fate.

Ironically, the conditions imposed on the Palestinians in their tomb, the benumbed state of their being, the years upon years of isolation and alienation, the loss of sensitivity to the rising and setting of the sun, the loss of friends and family, the loss of consciousness to all that surrounds them since it has been turned to ashes and waste, the loss of memory that gave identity to their being since none know now that they even exist behind the Wall, the loss of their very purpose to live, the loss of hope that has been entombed with them, their dependency on strangers to sustain what life breathes in their lungs is mirrored in the metaphor of Sharon lying in his sheeted shroud as day crowds on day, unable to respond to anyone or anything, entombed in his own flesh, unconscious, as the indifferent are unconscious, to his own plight or that of those he has buried alive.

-William Cook is a professor of English at the University of La Verne in southern California. His book, Psalms for the 21st Century, was published by Mellen Press. His newest book, Tracking Depception, will be released next month. He can be reached at: cookb@ULV.EDU