Alan Johnston must be liberated 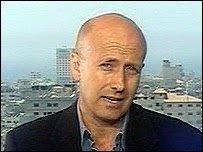 "We, the undersigned, demand the immediate release of BBC Gaza correspondent Alan Johnston," the ad states.

"It's now been 21 days since Alan was abducted and we have still not received firm word about his whereabouts or his condition ... We ask again that everyone with influence on this situation increase their efforts, to ensure that Alan is freed quickly and unharmed."
The BBC has had no contact with Mr Johnston since mid-March and it is believed he has been kidnapped, although no demands have been made public.

Palestinian journalists are planning a rally and a boycott of coverage of government activities to press for his release.

Mr Johnston has lived and worked in Gaza for the past three years. He joined the BBC World Service in 1991 and has spent eight of the past 16 years as a correspondent, including periods in Uzbekistan and Afghanistan.

MORE from Jon Williams' BBC Blog
and from the BBC site
The BBC has made a plea for information about the whereabouts of BBC Gaza correspondent Alan Johnston.

Middle East bureau chief Simon Wilson said the corporation had received no firm word on Johnston since he disappeared on Monday.

He thanked all those who had tried to help resolve the situation, including Palestinian President Mahmoud Abbas and PM Ismail Haniya.
Mr Haniya said he told security forces to do all they could to find him.

Living with risk in Gaza

Kidnappings were unacceptable and "harm the civilised face of our people", he added.

Palestinian security officials say Johnston was kidnapped from his car by masked gunmen, but the BBC says it cannot independently verify these reports.

Other reports in Gaza say he is healthy and negotiations are under way with the abductors to secure his release.

Reading a statement in Gaza, Wilson said Johnston had dedicated the last three years to living and working with the people of Gaza, and it was now becoming clear how much his efforts were appreciated.

"We would therefore urge everyone with influence here to continue their efforts so that Alan may be reunited with his family and colleagues at the earliest opportunity," he said.

He added that the journalist's family was being kept fully updated and was "very moved" by expressions of support from around the world.

There has been a series of abductions of Westerners in the increasingly lawless Gaza Strip.

All were eventually released unharmed.

The motives for the abductions were mainly local - unpaid salaries, demands for jobs or the release of jailed family members.