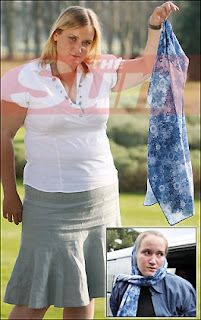 ‘The blood drained from her face and Faye whispered, 'there's going to be a rape involved in this' Operator Maintainer Arthur Batchelor Daily Mirror 9th April 2007

Faye Turney, the ‘she-man’ Seaman captured in Shatt al-Arab last month, claims her captivity in Teheran was marred by fear of rape, torture and a lifetime of incarceration. Despite having been released unharmed, a bizarre scene is emerging from the dark recesses of Turney’s imagination in which the saintly mother of little Molly (3) was subjected to floundering indefinitely in a dingy jail wearing nothing but pair of knickers and a floral headscarf. According to Faye’s ‘worst fears’ her ‘evil captors’ spied on her through her cell door slat, cracked jokes about her imminent martyrdom and most bizarrely of all, felt compelled to fit her out with her very own hand-crafted, bespoke coffin. Here is our first hint that we are dealing with the humiliation fantasies of a serious narcissist; while the Islamic Revolutionary Guard indeed have affiliations with the Moral Police responsible for public executions, I doubt very much that they throw a made-to-measure coffin service into the deal.

Nothing here adds up. But it doesn’t have to because the press have finally dispensed with the pursuit of truth altogether. Faye Turney’s fears are being treated by the media as if they were facts. Do a Google search on ‘Faye Turney rape’ and over 80,000 results appear. Remarkable really, given the woman has not been raped at all and is even claiming that she was not. Such is the ravenous appetite in Britain for titillating tales of defenceless damsels and wicked Arabs, the Sun-reading British electorate doesn’t care anymore if the narrative is absolute fantasy or not, so long as the victim is a westerner and the aggressor is a Muslim.

Thus, it doesn’t matter that Turney & Co were well-fed, clothed, even supplied with Marlborough Lights and Presidential ‘goodie bags’. It doesn’t matter that none of the 15 were exposed to torture, sexual abuse or humiliation. It doesn’t matter either that the worst trauma they endured was having their I Pods confiscated and forced to wear outfits that looked a bit ‘last year’. Arthur Batchelor, one of the Seaman, who we can assume has received at least some Military training for coping with stress during captivity, said: ‘Those suits were an insult. Not only did mine not fit, but it was cheap and tacky and the Hugo Boss shirt was a fake.’ What? So this is the ‘mental torment’ he insists on peddling for cash? The message is clear, the Seamen were treated well. Another message is also clear; the news-consuming public refuses to internalise this. Fay's abuse was in her disturbed mind and what is even more disturbing is the fact that our minds are deviant enough to consume her sickening fantasies. Without delving too deeply into the collective perversion of an entire nation, it is crucial to note that the British, who built their pseudo-egalitarian, post-industrial, mega-economy on the backs of two centuries of colonized labour, just love to feel like they are the victim. Check out the streets of Soho if you need proof.

What is more alarming, is that British media are quick to mobilise this penchant for humiliation in order to spoon feed us fictional narratives that reinforce the binary underpinning Anglo-American-Israeli foreign policy: Muslim=terrorist/Westerner=liberator. Since Turney traded in her phantasmic trauma for a substantial wad of Rupert Murdoch’s cash we are inundated with stories about her not being raped. Without the popular fear of Islam bestowing a veneer of feasibility into this narrative, Turney’s confessional would be exposed for the absurd non-event that it is. Try to imagine an equivalent news flash without the anti-Muslim agenda: ‘Man Thought He Was Being Followed Home by Rabid Gunmen, But Then He Realized It Was His Mum & He Was Just Being Paranoid.’ Or ‘Footsie Share Index Plummets to Record Lows Thought City Worker When He Accidentally Leant on His Apple Mac Keyboard Earlier Today.'

The rape, the torture, the execution didn’t happen but still it is reported over and over again simply on the proviso that it was temporarily imagined to be true in the mind of one woman. Truth is elusive, murky territory, impossible to fix or locate, impervious to the tyranny of technological mapping devices that offer objective comprehendible absolutes. Truth is relative, deceptive, it is in process, it never arrives at its destination and yet, we all insist on chasing it into oblivion. What has happened in the case of Faye Turney is that we seem to have given up the quest altogether, we have willingly surrendered to the absolutist reassurance of fear, at the expense of truth. Not only are we cut adrift from facts, we are not even pretending to look for them anymore, we are heading for a terrain were facts no longer matter.

On 9th April 2007 Blair, a man who, among his many sins, incarcerates Muslims for months on end without charge, dubbed Iran a ‘cruel and callous’ nation. So complicit are we in the demonisation of an entire civilization, we knowingly consume this fantasy of cruelty rather than consider the real possibility of humanity. We are invited to believe that Turney, the giant Viking of the Gulf Sea, is the ultimate victim, while Ahmadinejad, who hopes, albeit naively, one day to defend his country from foreign invaders, is the ultimate evil. The tragedy is we are no longer concerned as to whether this is true or not.