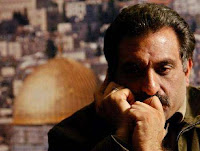 From Ma'an News Agency Bethlehem - Ma'an - Right-wing Israeli members of the Knesset have stepped up their accusations against Azmi Bishara, a former Arab Palestinian member of the Knesset, who resigned earlier this week and is currently facing charges in Israel of "collaboration with the enemy" and money laundering.

"The suspicions against Bishara prove that Trojan horses, a fifth column, have infiltrated the Knesset. He must be captured, wherever he hides, and brought to justice in Israel," said the Israeli National Religious Party chairman and member of the Knesset, Zevulun Orlev, on Thursday, according to reports on the website of the Israeli daily Yedioth Ahronoth.

The extreme right-wing party, Yisrael Beiteinu, which is headed by Avigdor Lieberman, accused the state of Israel of burying its head in the sand.

"Azmi Bishara is only a window on the problem and not the problem itself. Bishara and his friends crossed the line a long time ago, but the state buried its head in the sand," a Yisrael Beiteinu statement said on Thursday.

"Yisrael Beiteinu had tried, in the past, to prevent this Trojan horse from entering the Knesset, and we can only imagine what damage to the state could have been avoided had our view point been accepted," the statement read.

Members of the right-wing Likud party and Prime Minister Olmert's Kadima party have also accused Bishara of being a traitor to Israel and a criminal.

Right-wing Likud Member of Knesset Gilad Erdan stated: "Bishara was never loyal to the State of Israel. He should be treated like an escaped criminal." Another Likud member of the Knesset, Yuval Steinitz, told Israel TV that Bishara should be brought to Israel and sued for high treason.

Otniel Schneller, a Kadima member of the Knesset, said: "The Knesset can only blame itself for allowing itself to sleep with the enemy and enabling a traitor like Bishara serve as a representative of the public."

Bishara, who left Israel nearly three weeks ago, is under Israeli investigation for suspected "collaboration with the enemy" during the war on Lebanon last summer. According to Yedioth Ahronoth, he is also accused of money laundering. He submitted his resignation from the Israeli Knesset in the Israeli embassy in Cairo last week.

Bishara has said that he is the victim of Israeli political persecution, accusing the Shin Bet intelligence service and the Israeli media of waging a smear campaign against him.

According to the Israeli daily Haaretz, Bishara told Nazareth's Radio Shams that "we do not believe that in this atmosphere of incitement ... we will have a fair trial."

Haaretz reported that, unless Bishara returns to Israel for a police interview "within a reasonable period of time," he may be declared a "fugitive from justice," according to Israeli police sources on Thursday.

A 'second war of independence'

Meanwhile, the Yisrael Beiteinu member of Knesset, Israel Hasson, told Yedioth Ahronoth that in a "normal" country Azmi Bishara would already be behind bars. Hasson also warned of a "second war of independence" against the Arab Palestinian citizens of Israel.

“Under the auspices of democracy … we are responding passively and facing the process of growing agitation amongst Israel’s Arabs who are not willing to accept the fact the country is a Jewish one," Hasson warned.

Plan to transfer the 'Triangle' to the PA

In a related report, the Kadima member of Knesset, Otinel Schneller has suggested a plan of transferring three villages in the so-called 'Triangle' area to the Palestinian Authority. The 'Triangle' refers to the area around Umm al-Fahm, west of the most north-easterly point of the occupied West Bank.

In exchange for the 'Triangle', the three largest settlement blocs in the occupied Palestinian West Bank, Ariel, Gush Etzion and Modi'in, all illegal under international law, will remain, and will be formally annexed into Israel.

In this so-called 'Hong Kong initiative', named after Britain's gradual handover of control of Hong King to China, the residents of the 'Triangle' will maintain their Israeli citizenship, including health and national insurance benefits, but will be banned from moving to other areas of Israel. They will also have to obtain special permits to work inside Israel.

"I want a true demographic line," Schneller told Ynet. "If for 20 years we give the triangle area economic incentives, the Arabs will have the motivation to become economic and national leaders of the Palestinian people," he suggested.