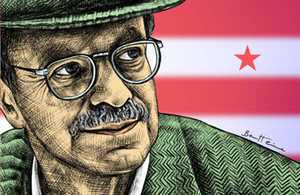 World exclusive multilanguage edition of a theatrical work of James Petras
Ghosts and Renegades, a three-act play
James Petras, 1 May 2007
Presented by Manuel Talens, translated by Mary Rizzo and illustrated by Ben Heine

Today, the First of May 2007, International Workers' Day, the Multilanguage translators of Rebelión and Tlaxcala are publishing a collective project that offers the translation into seven languages of this theatrical work written in English by the Sociologist James Petras. The text that follows is the presentation that accompanies the project, written by its editor, Manuel Talens. Readers may click at this end of this page upon the PDF version of Ghosts and Renegades that they wish to download.

Introduction
James Petras is an old acquaintance of Altahrir, Basta!, BenHeine-Cartoons, Cubadebate, PeacePalestine, Quibla, Rebelión, Tlaxcala and ViaPolítica’s activist translators. His texts appear regularly on these websites and in them he relentlessly denounces the continuous tragedies inflicted on peoples by capitalism, either in the Latin American subcontinent - the land he loves the most - or in Palestine, Iraq or - as Che Guevara said - in any place of the world where there is an injustice.

Petras is, without any doubts, the paradigm of the “political animal” defined by Aristotle in Politics. His writings, always immersed in Sociology and Marxism, do not limit themselves to an essay analysis of reality but rather enter with certain frequency into fictional territory. I began to correspond with James Petras some years ago through the Spanish translations I made of the pieces he sends to Rebelión. However, I only ended up becoming intimate with him when in 2004 he offered me a series of short stories and asked me to set up a book to offer as a gift to our Spanish-speaking readers. That was how La lengua del pueblo was born and published three years ago, also on May 1st, in 2004.
Ghosts and Renegades, the play you now have before your eyes, friendly reader, arrived in my electronic mailbox at the beginning of this year. It is a devastating denunciation by Petras against the former left wingers of the recent past who today have succumbed before the mermaid’s songs of capital, betraying in this way all those who died for the cause of liberation. I suppose our author could have felt satisfied if we, his many friends, would have translated it into some languages or, perhaps, if we repeated La lengua del pueblo’s successful experience, but during the three years that have lapsed since 2004 many things have happened in left wing activism, among them the birth of Tlaxcala, the network of translators for linguistic diversity, a group of people capable today of a multilingual coordination unimaginable in years past. So I proposed him a multilingual edition of his play and he was delighted about the idea. Here it is.
The seven translators involved in this project hope the experience will be repeated in the future, and not only with James Petras, but also with any other important author willing to donate her/his work with no profit motive in mind for the advance of justice, fraternity and solidarity on this terrible world which we have as home.
Madrid, April of 2007
Fantasmas y renegados (Edición bilingüe Inglés-Español), translated by Manuel Talens
Fantasmes i renegats (Edició bilingüe Anglès-Català), translated by Àlex Tarradellas
Fantômes et rénegats (Édition bilingue Anglais-Français), translated by Fausto Giudice
Fantasmi e rinnegati (Edizione bilingue Inglese-Italiano), translated by Mary Rizzo
Fantasmas e renegados (Edição bilingüe Inglês-Português), translated by Omar L. Barros Filho
Geister und Renegaten (Zweisprachige Ausgabe Englisch-Deutsch), translated by Isolda Bohler
Spöken och renegater (Tvåspråkig version Engelska-Svenska), translated by Kristoffer Larsson