In the photo: Dahlan with Olmert 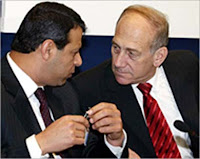 Al Ahram Weekly
It is imperative that Fatah and Hamas reach an accord sooner or later to prevent further infighting, writes Khaled Amayreh in the West Bank

Careful to ensure that the "shortcomings" of last year's war with Hizbullah were not repeated, the Israeli army continued to bomb Palestinian residential neighbourhoods in Gaza and surrounding areas, inflicting death and destruction on the defenceless population.

The missiles destroyed his home, killed at least six members of his family, including his wife and a number of his children. Another two visitors in the Al-Hayya home were also killed in the attack which Israeli officials suggested were designed to cause "shock and awe". Al-Hayya, however, escaped injury.

Earlier, the Israeli airforce carried out a number of sorties against government buildings, injuring many civilians and causing untold damage to the infrastructure.

Approximately 30 Palestinians were killed, over half of them unarmed and with no connection to any armed groups. The Israelis claimed that the attacks were carried out in response to a barrage of Qassam missiles that were launched into Israeli towns, such as Sderot, near the Gaza border.

However, the Qassams are notoriously inaccurate and although they make a lot of noise and smoke, and cause some destruction, they have killed very few people. This is why they are viewed by Israelis and many Palestinians as primarily a psychological weapon that fosters a collective feeling of anxiety amongst the Israeli population, especially those in Sderot.

This anxiety was exacerbated when one Israeli woman was killed in Sderot. So far, this was the sole casualty caused by the firing of more than 60 Qassams, a clarion testimony to the relatively ineffectiveness of these projectiles.

There is no doubt that the fundamental motivation behind the latest Israeli incursion into Gaza has far more to do with the Israeli government's desire to compensate for the shortcomings of the Lebanon war and to implement the Winograd Committee's recommendations. This followed the strong criticisms made against the political-military establishment by the committee which issued accusations of mismanagement and claimed that these had allowed Hizbullah to inflict high casualties on the Israeli side.

Indeed, Israeli military leaders were hesitant about attacking Hamas while the infighting between the two Palestinian organisations raged. However, when it died down, the Israeli army moved specifically against Hamas.

Last week, the Israeli newspaper Haaretz reported that unnamed Western governments, including presumably the US, had asked Israel to help Fatah defeat Hamas, following the example of Ethiopian intervention in Somalia against the former Union of Islamic Courts' fighters.

Fatah angrily dismissed these accusations as any veracity thereof would portray them as proxies of the Israelis and Americans fighting Patriotic Palestinians.

On Sunday, Urayeb Rantawi, a Palestinian commentator based in Jordan, urged Fatah to confirm their raison d'être and clarify their goals. "We want to know and the Palestinian people want to know, is Fatah still the glorious liberation movement that started and maintained the struggle for freedom and liberation over the decades or has it turned into an Israelised group that is being financed and armed by the United States and Israel?"

The last bout of infighting, which lasted more than a week, left as many as 45 Palestinians dead, and many more injured. Furthermore, the fighting exacerbated the psychological chasm between the two movements and may have set the stage for future armed confrontations if comprehensive resolutions are not reached in the near future.

Gaza journalist Salah Al-Naami, an expert on Israeli affairs and correspondent for the London- based pan-Arab newspaper, Al-Sharq Al-Awsat, wrote on Monday that unless Hamas and Fatah agreed to a true partnership, the latest ceasefire would be a mere hiatus or a brief respite in the fratricidal fighting.

Al-Naami also suggested that traditional forms of reconciliation between the clans and families of Gaza, who have lost sons in the internal fighting, be adopted whereby "bloody money" or diyya, is paid to each and every bereaved family.

Al-Naami called on rich Arab states to undertake this task, saying that such an undertaking would be considered a radical treatment of the problem.

On the political level, it is also safe to assume that confrontations will resume sooner rather than later if the forces and militias answerable to Dahlan, and Hamas's Executive Force continue to refuse to answer to the Palestinian Interior Ministry.

Indeed, it was due to this refusal that Hani Al-Qawasmeh, the former interior minister, angrily quit his job recently, arguing that the militias ignored orders from the Interior Ministry.

More to the point, it is also imperative that the Palestinian leadership make sure that the Fatah forces sever all contacts and coordination with American representatives, such as the United States Security Coordinator to the PA and Israel, Keith W Dayton, who make no secret of their desire to stoke the fire of civil war among Palestinians, apparently for the purpose of serving Israeli interests.