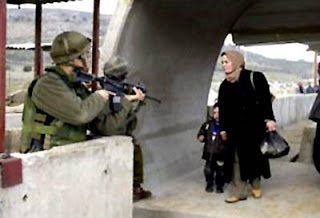 The world is full of countries having hateful politics, starting with Uganda, one can move on down the line until reaching Italy.

Israel, in other words, is in excellent – or terrible – company.

And we could even be disinterested in all of this: as it is, it is tiring enough for me to consign in record time the translations I do to put food on my table, how could I spend what time is left focusing on all the horrors that happen in the four corners of the world.

And yet, we are all forced to focus on them.

Because the total and unlimited support of Israel is part and parcel of all the proclamations of the candidates of the upcoming presidential election in the United States, that is, the country that could exterminate anyone on the planet in a matter of minutes, should they be thus inclined.

Because Israel holds the monopoly of atomic weapons in the Middle East.

Because the president of our republic (Italy, translator’s note) feels the need to say that one must not criticise the founding ideology of Israel.

Whenever one discusses a political system, it is easy to lose oneself in the false trails and in distracting issues.

We could, for example, speak of the government of the deceased Spanish dictator Francisco Franco, saying that he did not undertake ritual human sacrifices, nor did he force chained slaves to build giant pyramids.

Then there are the distracting issues to think about: are we really certain that the coming of power of Franco was completely illegal? Are we certain that in a specific massacre, the Franchists were not perhaps provoked, or that they really killed children and not only women? And what could we say about the priests killed by the anarchists? And about the anarchists killed by the communists? And in the Spain of Franco, were things really worse than in the Cambodia of Pol Pot?

If we start following the false trails, Franco would probably come out as a nice guy.

If we get lost in the distracting issues, we will end up in a maze, without being able to make sense of anything.

The point is that the dictatorship of Franco was a ferocious one, one that put to death thousands of its own citizens and had defended the interests of the oligarchic landowners and the Spanish industrialists rather than their victims.

False trails, with Israel, regard the matters of “theocracy” and “dictatorial government”.

Zionism is a typical European nationalism (one of those that Zeev Sternhell called “national socialisms”) that was founded by declared atheists, in contradiction with the majority of the Jewish religious authorities of the world, and therefore, in itself is not a theocracy. Zionism is, actually, a surrogate for religion, but that is another matter entirely.

Further, Zionism is a voluntary project, which one joins by choice, and which asks for the best that anyone who participates can offer.

Therefore, it is obvious that the Israeli government can’t be called a dictatorial regime: in fact, I am not criticising the governments of Israel, that simply apply Zionism, but I criticise Zionism itself. I am not even saying that Israel is a “fascist state”, because there is evidently no Mussolini in that area.

Israel is, rather, an ethnocracy.

That is, the sort of state in which whoever has the good fortune to be born into the right ethnic group enjoys all rights and privileges imaginable. There is a free press, free elections, fair trials and everything else, just like the Whites of South Africa had, when they took advantage of an enviable civil rights situation for themselves.

Good for them, I am pleased that they enjoy rights.

But Israel is not a democracy, that is, it is not a state that is based on equality of the human beings who live there.

It’s enough to define a “state” in an elementary and non-rhetorical way to understand why: “state”, when it comes down to it, is that power, however it is defined on paper, that can use organised and systematic violence against individuals. Not occasional violence, an isolated incident, but the ultimate control on one’s economic resources, one’s freedom of movement, one’s life and death.

In this sense, for 40 years, there has been one single state between the Jordan River and the sea.

In this single state, 5,000,000 Israeli citizens belong to the dominant ethnic group, therefore, are guaranteed full civil rights. These same rights belong, potentially, to millions of other persons who, wisely however, live elsewhere.

1,300,000 native Palestinians with the right documents are given a certain number of rights, on the condition that they accept the declared and official supremacy of the dominant ethnic group. The rights of these persons are, in reality, incredibly restricted by an infinite number of rules and measures, in addition to being enclosed almost entirely in specific “Arab villages”. (*)

4,000,000 native Palestinians, who are without the right documents, don’t even have the right to be executed only following a normal trial.

To continue to deprive four million people of their right to vote, (not to mention their right to life), there has been talk for years and years of granting, within the year 3000, a certain autonomy on approximately 10% of a territory that is already small, to subdivide into minascule islands – Gaza, Ramallah, Hebron – without resources and separated from one another by walls: the famous project of Four States for Two People.

If one understands all of this, one also understands that the issue is not to root for the Israelis or for the Palestinians.

A person never decides his place of birth, and therefore, it cannot be a fault (although it can be a blessing or a curse). And therefore, I have no preconceived preferences for one or the other of the ethnic groups: my preference is for democracy, simply put.

Someone may tell me that what is taking place in the Land of Canaan – to use an excellent Biblical term for that land – is not worse than what is happening in Liberia. As a matter of fact, under certain circumstances, I am sure that worse things happen in Liberia.

But the point is always the same: no one is asking me to blindly and faithfully support the right of the dominant ethnic group in Liberia to do whatever they so desire to the dominated ethnic groups.

For this reason, my problem Israel-Palestinian is not with Olmert or Sharon, but with Prodi and Berlusconi.

Prodi and Berlusconi don’t say, “we must support Israeli ethnocracy for reasons of Realpolitik”, as one does with the dictatorship of Hosni Mubarak in Egypt.

It would be necessary to discuss this policy, but that at least would not require a complete upheaval of the foundational principles of democracy.

No. Prodi and Berlusconi say that we need to support Israel as it is, a Zionist ethnocracy.

But if I am saying that ethnocracies are a good thing, I accept that it is necessary to remodel the world – as it actually is happening – on the open and declared principle that only the dominant have rights.

(*) On the question, as crucial as it is ignored, of the “Israeli Arabs”, I suggest the reading of Susan Nathan’s excellent book, The Other Side of Israel.

Original in Italian of this post: verba valent blog, the blog of Dacia Valent

Translated from Italian by Mary Rizzo, member of Tlaxcala, network of translators for linguistic diversity. This translation is Copyleft, and may be reprinted as long as the source, author and translator are cited.