Nakba at 59 - winners of Al-Awda Celebration of Creative Resistance 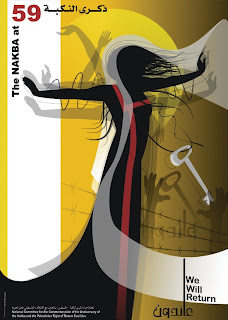 BADIL, 1 May: "Today we have crossed walls and borders. Your presence, energy and works prove that the quest for justice and the right of return inspires generations", said Palestinian novelist Salman Natour, moderator of the 2007 Al-Awda Award Festival, to the full theater hall of the Cultural Palace in Ramallah.

The 16 winners of the Al-Awda Award were honored by Palestinian artists, scholars, politicians and professionals, members of the jury and award committees, a special performance of the Palestinian dance troupe al-Funoun al-Sha'biyya, and an audience of over 750 who had arrived from Haifa, Nazareth, and the refugee camps and towns of the occupied West Bank. Best short films and posters were exhibited during the event.

BADIL's Al-Awda Award encourages cultural expression on the Nakba and Palestinian refugees' right of return. For photos of the event and copies of the award winning posters, see: www.badil.org
The winners of the 2007 Award are: