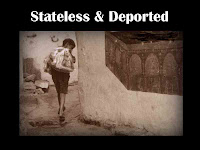 As the native sons and daughters of Palestine, the Palestinian citizens in Israel are always amused by the arguments: "If you do not like your inferior status - you can leave; if you define yourself as a Palestinian and sympathise with the Palestinian struggle for freedom and self-determination - you can join your brothers and sisters in Palestine."

Of course those making these arguments do not note the irony underpinning their thinking:

First, immigrants - including recent immigrants like cabinet minister Avigdor Lieberman - or descendents of immigrants are asking the indigenous population to leave their own homeland.
Second, through designing state policies, institutionalised discrimination, and a popular culture of hate, they are making the lives of the natives unbearable in the hope they will be "encouraged" to leave.

Third, these arguments are presupposing the false assumption that the Palestinian minority is a minority of immigrants like the Turks in Germany or the Pakistanis in the United Kingdom. As a minority of immigrants they are supposed, so goes the argument, to adjust to their new country of choice and bear the consequences of alienation with the new reality and symbols of the state. They cannot seriously have complaints about their status because they themselves had chosen to migrate to this state. If they do not like it they might migrate again.

Those same persons using this kind of argument will be appalled when anybody answers their complaints concerning "Arab hostility" to Israel and "terrorist attacks" by saying: "You had chosen to immigrate to Palestine and establish a state in the Middle East in an Arab region on the expense of the indigenous people. If you do not like this reality you can leave."

The fact of the matter is the Palestinian citizens did not immigrate to Israel; rather they had lived in their homeland long before Israel became a reality.

Fourth, another irony is the fact that Israeli policies themselves are preventing the emergence of a Palestinian state. By refusing to withdraw from the occupied land, destroying the Palestinian authority in the recent intifada, building more and more colonies and expanding Greater Jerusalem, building a separation wall inside the West Bank, refusing to engage in any meaningful negotiations in more than six years, rejecting and boycotting the democratically elected Palestinian officials (whether Arafat or Hamas government), destroying the Palestinian economy (as a report by the World Bank has just indicated), and cutting the territories into isolated Bantustans - Israel is making a Palestinian state look like a remote dream.

Further, it is making the Palestinian ordinary life unbearable "encouraging" more people to immigrate. The Palestinian citizens of Israel are being asked to join this man-made reality. Just to be asked again to leave.

Of course, the knee-jerk reaction to this last argument by Israeli apologists is: "Israel will withdraw when Palestinian violence ends." This argument does not take into account that the original sin is the occupation itself and that resistance is a natural historical outcome. It does not also answer the question of building colonies and sending more Jewish settlers. It does not as well answer the question why Israel did not withdraw from the Golan Heights.

For four decades, the Syrian-Israeli ceasefire line has been among the most quiet in the world and yet there is no intention to withdraw on Israel's part; on the contrary - its colonies are flourishing. In the last year we saw how Israel turns its back to a Syrian invitation for negotiations. Finally, this argument also attempts vainly to present Israel as a victim, as reacting to events, with no political agency. The argument "you can leave", however, is not only amusing and ironic. It is also alarming. First, it serves to justify the institutionalised discrimination against the native population. "You think it is bad? We can make it worse," or "You can have it worse elsewhere, so sit quietly." In this Zionist perspective the Palestinian is an unwelcomed and unwanted guest. As a guest the Palestinian should behave, otherwise the citizenship status will be stripped. As a guest in his homeland, the Palestinian is expected to be thankful for the leftovers of rights that the new masters of the land might grant him.

Second it is not just an argument; it is also the basis for serious policy proposals by cabinet ministers, public opinion makers and members of the Israeli parliament. There is a long list of influential politicians, academics and journalists who have proposed variations of "exchange of lands" or "exchange of populations" or even expulsion with the purpose of getting rid of the native citizens and enhancing the Jewish ethnic and ideological character of the state. Two-thirds of the Jewish majority in recent years expressed its demand from the government to "encourage" the Palestinian citizens to emigrate. And one-third of the Jewish Israelis support the expulsion of Palestinian citizens.

These proposals are part of the conception that the Palestinian citizens are a "demographic threat". A Jewish state entails the maintenance of a solid Jewish majority. Therefore, it cannot coexist with a large Palestinian minority. It has been and will always be - so long as it is defined as such - concerned by how many Arabs and Jews were born in a certain year. Every newly-born Palestinian child inside Israel is a direct threat to the demographic equation. That's why serious and prestigious institutions and conferences (such as the Herzliya Conference, the Demographic Centre, the Public Council for Demography) convene to discuss how this demographic threat should be "contained".

That's why Benny Morris lamented (including in the Guardian) the fact that Ben-Gurion did not complete his project of expulsion of the natives in 1948.

The existence of Palestinian citizens in a Jewish and Zionist state reveals the inherent contradiction of the Zionist project: you cannot have a Jewish supremacy and claim that you are democratic because you do not propose equal and universal citizenship.

Nimer Sultany is a Palestinian citizen of Israel and currently a doctoral candidate at Harvard Law School. He has worked as a human rights lawyer in the Association for Civil Rights in Israel and as the head of the political monitoring project at Mada al-Carmel (the Arab centre for applied social research).