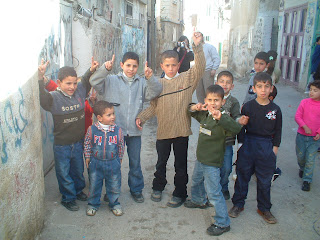 The beautiful children in the picture to the left live in the West Bank. As things are today, we can consider them "the lucky ones", out of the way of the most cruel violence going on in their country, to their brothers and sisters in Gaza. But, these children too live under occupation. Look at them carefully. They are young, but they want to indicate how they feel. They show the signs of Victory, Peace, and of the victory of God against the lawlessness of man.

What is going on in Gaza? Shamelessly, while the West condemned the Palestinians to starvation and denial of freedom of movement and access to health and sanitary supplies, they kept on sending weapons to the so-called "moderate faction" of the Palestinian elected autority, while continuing to call the Hamas "a terrorist organisation". Fueling an already critical situation, where the difficulties are nearly inimaginable, Palestinians fight, brother against brother, in Gaza.... ignoring that the real enemy is anyone who denies the Palestinians their rights, which include to elect the people they wish to be governed by. Today, in the daily dispatch from the Israeli Foreign Affairs Ministry, we see the laying down of the red carpet for an all out war against Palestinians. It says:

But I would like you to understand that the way to stop it is not only by embracing the moderates; it is not only by demanding that Israel ease the lives of the Palestinians; it is not only about passages. Sometimes, there is the need to show determination, to put pressure on the extremists, to put pressure on these terrorists - in order that they and the Palestinian people will understand that this is something which is not tolerable. This is something that also affects their lives.

During the last few days, Israel has made some decisions and we are going to have another government meeting on Sunday. But I just want to say that I think that, for too long, the international community has taken the situation in the southern part of Israel as acceptable, as part of the routine in Israel - and it is not. Enough is enough.

During this briefing, you will hear more about the internal situation within the Palestinian Authority, and I will try and explain what the options are, so that you will also understand.Of course, I would also like to take this opportunity to send our message of understanding and empathy to the people of Sderot. And I believe that I am not doing this only personally, but that you share with us the same feeling and understanding, and the need to help and understand their situation."

I say: Israelis claim they seek peace, but "enough is enough"? Enough is too much. STOP ISRAEL NOW!!! STOP THE FOMENTING OF CIVIL WAR BETWEEN PALESTINIANS!!!