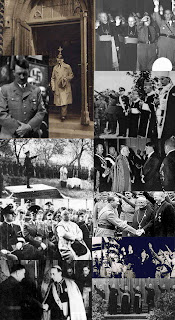 Third part on the Declaration of Values - Utopia and Mystification

In the two previous parts I took the opportunity of denouncing the enormous historical mystification that the Declaration of Values, Citizenship and Integration, drawn up by a “Scientific Committee” from the Ministry of the Interior, would implicitly pass off as credible and as the Only and Incontrovertible Truth, by submitting it prior to the approval and undersigning of the members from the Islamic Council of the Ministry, and then to the one of the representatives of the religious communities and hence, maybe, to that of the immigrants themselves who aspire to live in Italy. Quite fortunately, the great mystification is included in the rhetorical introduction of the document and therefore­ - turning a blind eye - ­one might even say that it is excluded from the document and that, as such, it is not subject to signers’ approval.

Notwithstanding, affixing a signature to a document that is introduced in such a partisan way might be interpreted by some as a substantial sharing of the content of the introduction as well. Which is why we should ponder and debate about it, even together with the “Scientific Committee” itself, still before thinking of signing that document.

I believe that it’s extremely serious that in a democratic state, where freedom of speech, opinion and research is guaranteed by the Constitution, anyone at all is demanded or even obliged - cost of exclusion from an office or from the right of residence itself­ - to sign, it is basically to recognize as valid and truthful a document offering with extreme nonchalance a historical theory that is the exclusive product of rhetorical propaganda not backed up by any proof or reliable evidence whatsoever.

The document presented by the Ministry, as matter of fact, takes for granted the existence of a “Judeo-Christian tradition” (please take note: they speak of “tradition” rather than “contemporary period”) and the rising of anti-Semitism through Europe as taking place only in the “20th century”. Well, the fact that a Judeo-Christian tradition has never existed and that anti-Semitism has epitomized a sort of lowest common denominator of the entire history of Europe, are matters of fact. And it happens that the main promoter of anti-Semitism was no less than the Christian-Catholic tradition itself, and the Italian-Catholic one in particular. Upholding this serious accusation, yet, is not yours truly but History itself. Namely, One story: that of Edgardo Mortara, a Jew who was kidnapped when he was 6 by the Holy Roman Church at Bologna in 1858.

Papal police knocked at the door of a Jewish merchant, Momolo Mortara, and took one of his children, the little Edgardo. The family tried desperately to oppose, but it was all in vain: the Inquisitor has found out that Edgardo was secretly baptized by a maid. Since the laws of the Church don’t allow a Christian child to be raised by a Jewish family, he orders the child to be transferred to Rome, at the Catechumen’s House, in order to improve his Catholic education. An affaire about which history books today even don’t even make a mention, but one that caused great scandal in 19th century and aroused heated quarrels in Europe and America and has been reconstructed with great detail by David I. Kertzer (1948, New York), an expert in Italian history and professor of Anthropology and History at Brown University in Providence (Rhode Island), in his book “Kidnapping of Edgardo Mortara” , published by Random House Inc. and translated in Italian by Rizzoli in 1996 and proposed again by BUR (note: Rizzoli’s Universal Library) in 2004 with the title “Prisoner of the King Pope”.

I’d like to share with you some of the acute observations the author raises at the end of the study. The first one reads: “On the whole, the treatment that the Church reserved for the Jews hasn’t been willingly discussed by the Church’s historians. It arouses too many embarrassing questions, especially after the Holocaust: who, in Europe, promoted the habit of demanding Jews to wear coloured marks in order to be more easily identified? Who, throughout the centuries, taught that any relation between Jews and Christians would tarnish the Christians and that it should be punished with force? It was much more convenient to consider the Italian Racist Laws of 1938 as provisions having nothing to do with the Church and even with Italy and as being a sort of imposition, the fault of foreigners.” A trend, this one, that survives still today, although through necessary adjustments: not only does the Italian media place the blame on immigrants for every possible and imaginable evil taking place in Italy­, while ignoring the beams in its own eyes - ­but still today the Church’s historians (and not they alone) don’t want to debate about and much less to hint at the direct responsibilities as regards the Holocaust tragedy.

Sherif is an Egyptian-Italian blogger extraordinaire: his blog
Translated from Italian by Diego Traversa and revised by Mary Rizzo, members of Tlaxcala, network of translators for linguistic diversity. It is on copyleft, and may be reprinted as long as the content remains unaltered, and the source, author and translator are cited.