Sherif El Sebaie – On The Declaration of Values: Utopia and Mystification 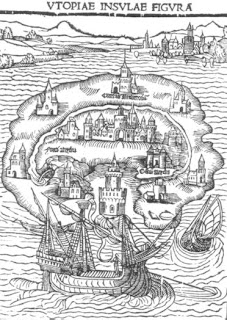 The "second part" of this was published on Peacepalestine
“Utopia” is a story by Thomas More that was published in classical Latin in Belgium in 1516 in which an imaginary kingdom-island with an ideal society is described. Entitled “De optimo reipublicae statu deque nova insula Utopia” (“On the Best State of a Republic and on the New Island of Utopia”, Utopia embodies the Renaissance dream of a pacific society where it is culture that rules and regulates human life. The illustration is an antique print of the island of Utopia.

The Declaration of Values, Citizenship and Integration, demanded by the Minister of the Interior Giuliano Amato, has finally been composed by an ad hoc “scientific Committee” that has been established right at the Ministry of the Interior. For six months, the Committee was at work — led by Prof. Carlo Cardia — meeting with “dozens of religious and foreign communities and associations representing immigrant women in Italy.” The goal: to define rights and duties that are equal for everyone and “to create society”, according to the words of Parliamentarian Khaled Fouad Allam, himself member of the Committee. The document, in the authors’ intentions, would be in fact meant for “stating values and valid principles for anyone who wishes to permanently reside in Italy.”

Originally, the Minister of the Interior apparently put forward very precise questions concerning the drafting of the document, and most of them they were integrated: the issues should take into account the international sphere, national matters, family and individual rights, coexistence and mutual respect between nations, rejection of aggression and weapons of mass destruction, support of spreading democracy, carrying out decisions of international organizations, approval of the principles of the European Union and also, in a national framework, the promotion of the principle of non-discrimination and of equal opportunity, of religious pluralism and of developing a school system founded on the “culture of the coexistence between national culture, local cultures and different ethnic and religious faiths.”

After the publication of the Declaration, the Minister stressed his admonishment to La Stampa daily: “According to the decrees that I suggested accompany the Declaration of Values, it is clear that whoever does not sign will not be allowed to join organisms instituted at my ministry.” Yet the Minister has also specified that the document itself shall not be imposed on the citizens: those who want to sign will be permitted to do so. Thus, it won’t have a “binding” or normative value, but it “might accompany the integration process and the path to citizenship of the immigrants.” It seems, as a matter of fact, that Minister Amato has already signed two decrees in which it is stated that the action of the Ministry of the Interiors “will draw inspiration from the contents of the Declaration in order to promote better knowledge about immigration problems and religious freedom.”

In other words, it doesn’t rule out that some parts of the text may serve as a starting point for future legislative modifications, especially in matters of immigration. The citizens won’t be asked to sign it, but it’s more than probable that immigrants – in particular the Islamic ones – will be required to do so in order either to have their visa or sojourn permit renewed or to obtain citizenship.

Nonetheless, the Declaration fortunately enough doesn’t foresee censure or limitations upon the rights of speech and information, hence I feel entitled to look into a document that – maybe - I too will have to sign one day in the future. Up to now, the document has come under much criticism: someone has said that it was “an upsetting patchwork filled with trite assertions that concealed an imposition and a limitation to the freedom of religion and speech”; someone else said that “it doesn’t introduce any new elements and, even if it did, it will be bound to remain unheeded, seeing as how these norms are not binding”; and someone else who said that “the Constitution is more than sufficient.”

As far as I’m concerned, it’s about a purely theoretical and mainly utopian document. Whoever is already complying with these tenets doesn’t need a Declaration of Values. On the contrary, the ones who don’t respect these ideas may might tranquilly ignore the Declaration or sign it with the sole purpose of remaining in the Council.

But what really makes this Declaration theoretical and utopian are the frequently recurring statements in the all the sections of which it is composed (Labour and Health; School, Education and Training; Family and new generations; Secular state and religious freedom; Italy’s international commitment): “Italy is committed so that every person, from the very moment they find themselves on Italian territory, may take advantage of the fundamental rights”, “The immigrant, just as any Italian citizen, has the right to a fair remuneration for the work he does”, “Italy is committed so that everyone may have a home suitable to the needs of their own family and at reasonable prices”, or else “It’s also the responsibility of the media to increase the knowledge about immigration, of its cultural and religious components while opposing prejudices and xenophobia” and again “The social rights and the rights of freedom, which our system has developed in the course of time, must be extended to all immigrants.”

Good and striking phrases, but ones that are clearly at odds with real facts, and even more so with actual daily life. Not only is it true that not all Italian citizen enjoy these rights (the fair remuneration for labour and the adequate housing to meet one’s own family’s needs come to mind, a recent case of a man who has kidnapped a woman at a shopping mall in Lucerna, threatening her with a knife, because he had been appealing in vain for a job and a home is just one of many examples) but everyday, making a mockery of the most basic rights, the immigrants are subjugated by the legislative red tape, exploited shamelessly and, what’s more, criminalised by the media.

Put as such, this document is supposed to be binding towards the government, the institutions and the Italian press and not (only) towards the immigrants, the religious organisations or the Islamic advisors to the Minister. Therefore, I hope Minister Amato, in his role of President of the Committee, will sign the document that has been drafted and that also the political leaders from the government and the opposition may be called to subscribe to it, as well as the editors of TV news programs and newspapers and anyone who, from far and near, comes to grips with immigration. Otherwise, this Declaration will become the umpteenth self-righteous declaration of intentions but lacking any juridical and even symbolic value. A utopian document, as I was saying, that has also stained itself with a mystification. But we’re going to speak about this tomorrow.

Sherif is an Egyptian-Italian blogger extraordinaire: his blog
Translated from Italian by Diego Traversa and revised by Mary Rizzo, members of Tlaxcala, network of translators for linguistic diversity. It is on copyleft, and may be reprinted as long as the content remains unaltered, and the source, author and translator are cited.