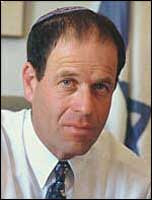 “ISRAELIS, LET’S FLEE ISRAEL”
Polemics on the change of heart of Avraham Burg, former star of Labor: ‘Whoever is able to, get yourselves a foreign passport.’

The former leader of the Jewish Agency gives his farewell to Zionism in a book bound to cause scandal.

JERUSALEM—He’s always liked playing the role of the killjoy; to shock the majority’s sleepy conformism through his ideas that go against the mainstream. Avraham Burg, one of the greatest promises of the Israeli left, president of the Jewish Agency at 40 years of age and Speaker of the Knesset at 45, after which he decided to quit politics at 50, risks stirring a pandemonium.

The reason: his book “Defeating Hitler” in which he demolishes some of the ideological pillars upon which the Jewish State has been founded. A book the journalist Ari Shavit, in the interview with the author published today in Haaretz, defines as a “farewell to Zionism”.

Just to hint at the sort of reactions that might arise from it, suffice it to know that Kadima Knesset member Otniel Schneller, after reading the advance excerpts that appeared in newspapers, proposed preventing, by law, Burg from being buried in the sector of the monumental cemetery at Mount Herzl, the one reserved to renowned personalities. Schneller seems to be calling for an even more radical burial prohibition for Burg, who is only 52 and lives in France: “He had better search for a grave in another country,” he thundered.

Burg doesn’t see Zionism as being a permanent ideology: “It seems to me that it was Ben-Gurion who said that the Zionist movement has been a scaffolding for building the house, to be removed once the home has been built.”

Nor is he willing to find Zionism’s outcome as inevitable, necessary and fair, that’s to say, the national Jewish State. At least, he says, “not in its present definition.” “To me the State is an instrument, a secular tool, totally indifferent to any spiritual, mystic or religious drive whatsoever. Defining Israel as a Jewish State and then adding the words (author’s note: of the blessing of the country that is read every Saturday in many synagogues) “Start of our redemption” is an explosive mix. What’s more, adding the attempt at making it contain democracy is impossible.”

Here, Burg’s arguing strikes one of the points bound to arouse major controversy. “Does that mean—the interviewer asks—that you don’t approve the idea of a Jewish State any longer?” “It can’t work—is Burg’s reply—Defining Israel as a Jewish State is the key to its end. A Jewish State is explosive, it’s an explosive.”

Another issue with potentially disruptive contents is the Law of Return that grants every Jew around the world to be able to emigrate to Israel and to get citizenship. “Do we need to change that law?” Shavit asks. “A debate needs to be started,” Burg admits. “The Law of Return is an apologetic law. It’s the mirror image of Hitler. I don’t want Hitler to define my identity. Being democratic and humanist, I’m put before a contradiction by the law. The Law of Return makes a clean break between us and the Diaspora, between us and the Arabs.”

Just as Ehad Ha-Am, pseudonym of Asher Zwi Ginsberg, a Russian thinker who upheld the idea of a cultural Zionism at odds with Herzl’s practical Zionism, Burg dreams of an Israel “which may be a spiritual centre” and not of contrast. Yet, actually, he can only see a traumatised country: “People aren’t willing to admit it, but the country is by now with its shoulders against the wall. Ask your friends—he tells the interviewer—whether they are sure or not that their children will go on living here. How many will say yes? Only half, at most. That’s to say that the Israeli elite has already departed from this place, and without elite there is no nation.”

“Are you arguing—retorts Shavit—that we’re suffocating by a lack of spirit?” “Definitely. We’re dead. We haven’t been told yet, but we’re already dead.” “And are you suggesting that each Israeli gets a foreign passport?” was Shavit’s next question.

“Yes, I’d suggest that to everyone who can.”

Translated from Italian by Diego Traversa and revised by Mary Rizzo, members of Tlaxcala, the network of translators for linguistic diversity. This translation is on Copyleft and may be reprinted as long as the source, author and translators are cited.