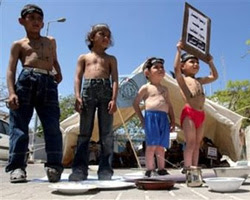 In support of the call below, and in addition, please note that there is again a situation of high alert in northern Gaza, because there are strong concerns that the sewage lakes there will not hold much longer. Urgently needed equipment for repair does not enter Gaza, and this time we are talking about the main sewage lakes, not about the small overflow lake of the last time. Thus, a humanitarian catastrophe is pending for many reasons in Gaza, while Israel's current newsline is that "Hamas is planning to create a humanitarian emergency there"!
Please make maximum effors to get the real story out. Do contact people in Gaza, including the phone numbers given below.
BADIL

Since last night, and only one day after the much celebrated Sharm El Sheikh summit, the Israeli Occupation Forces have been attacking the Gaza Strip-Khan Younus and Shijaeyya neighbourhood-- with Mirkava tanks, Apache helicopters and F16. Instead of sending the promised "humanitarian aid" to the people of Gaza, as the Sharm El Sheikh leaders decided, Israel so far has killed 10 civilians, including a 10 year old child.

We condemn in the strongest possible terms these heinous crimes and call upon all civil society organizations and freedom loving people to act immediately in any possible way to put pressure on their governments to end diplomatic ties with Apartheid Israel and institute sanctions against it for its 40 years of military occupation of Palestine. We also call on the international community and the Arab and Islamic worlds, to take up their responsibility to protect the Palestinian people from this heinous aggression and immediately terminate the continuing Israeli policy of collective punishment.

We demand the immediate halt of the Israeli Occupation Forces' attacks on the Gaza Strip and an end to the closure and isolation of the Strip, both of which are exacerbating an already desperate humanitarian situation inside the Strip.