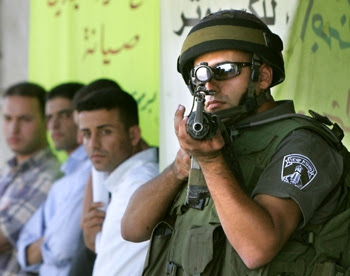 The troops ransacked the homes before stationing themselves on the rooftops. Eyewitnesses reported that the Israeli infantry raided several homes and abused Palestinian property, before interrogating the residents. A number of residents were arrested.The Israeli military, speaking through a loudspeaker, ordered all male residents of Rafah between the ages of 16 and 45 to evacuate their homes and gather in a central square.

Head of the Palestinian joint operation room, Atif Hussein, reported that more than fifteen tanks and four bulldozers entered Rafah at dawn and the troops occupied the tower buildings and stationed themselves on the rooftops.

Information Minister Mustafa Barghouthi said that the government confirmed its position which called for a truce and the adoption of Abbas' ten-point plan. The plan includes the following points:
1. The factions will stop the projectile launching.
2. Israel will stop its ground, sea and air operations.
3. The truce will include the West Bank.
4. The truce will be immediately implemented once the parties reach an agreement.
5. Israel will stop all assassinations, pursuits and arrests in the West Bank and the Gaza Strip.
6. The issue of the deportees and the "wanted" men will be solved in a separate agreement.
7. The Palestinian government ministers, the Palestinian Legislative Council members and the municipality mayors and local council members will be released.
8. Israel will withdraw from the lands reoccupied on 28 September 2000.
9. All barriers in the West Bank will be removed and border movement will be eased.
10. As soon as the first two items are implemented, the Palestinian Authority will start gradually deploying security forces along the north-eastern borders of the Gaza Strip.

The PLO's executive committee also stressed the importance of ensuring the forthcoming meeting between President Abbas and Israeli Prime Minister Olmert is a success.

Abbas updated the committee about his efforts on both the political and security levels, especially regarding the mutual truce with Israel, which should include the West Bank.

The committee condemned the Israeli occupation's policy of assassination and destruction and rejected all Israeli justifications in this regard. The committee also warned of the dangers of the Israeli settlement plans which target Jerusalem and its environs. They called on the international Quartet of Middle East negotiators – the UN, EU, USA and Russia – to take a strong stand in the face of the Israeli plans which obstruct the two-state solution.

Discussing the crisis in Lebanon, the committee confirmed that financial aid should be sent to the Palestinian refugees there in order to ease their suffering. The committee urged all factions to redouble their efforts to protect the Palestinian refugees and to confront all the terrorist factions which are attempting to use the camps as a cover for their acts. The committee also called on the various factions to coordinate with the Lebanese government in order to end the crisis.

Regarding the ongoing inter-factional dialogue in Cairo, the PLO executive committee urged the committee in charge of the dialogue to do its best to ensure a successful dialogue while also urging the factions to act responsibly in order to ease the dialogue and end the obstacles.

The committee also urged Palestinians to commemorate the fortieth anniversary of the 1967 war and the occupation of the West Bank and the Gaza Strip.