Interview with a Physician on Nahr el-Bared Tragedy 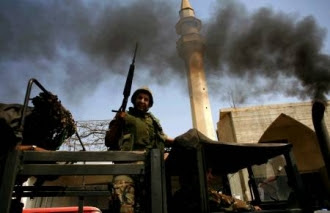 Please visit Nahr el Bared Relief Campaign! Add their information to any leaflets you may hand out at this weekend's demonstrations!

Q: What is your name and profession?
A: My name is Saleh Bhar and I am a pediatrician at American University Hospital (AUH, Beirut, Lebanon).

Q: We learned that you lost a member of your family during the bombings, which day was that?
A: During the first hours of the first day of the bombardment. My uncle died in his home when he was hit by one of the shells, he was with his two sons and one of his neighbors.

Q: How did you learn about his death?
A: My cousins told me that night.

Q: What was your uncle's name?
A: Salim Bhar, he was 75 years old, he used to work at Popular Committee and was working lately at his restaurant.

Q: What about your folks?
A: My parents told me that our house was hit by a shell. I also learned from neighbors that the damage is serious, as it was shelled more than once. They staying at my aunt's in Tripoli.

Q: Where is your house located?
A: In the Saffouri part of the camp, at the Mohammara entrance.

Q: Do you know of any other relatives who may have possibly been injured or died?
A: My uncle's wife was injured. I have many relatives who lost their houses. My cousin Amin Bhar, a dentist, lost his house. My other cousin, also a doctor, lost his house too. My cousins told me that my uncle's neighbor, Raed el Shans, who was with him when his house was shelled, also died with my uncle.

Q: Do you know if anyone in your neighborhood was injured or killed?
A: My cousins told me that there are more than 20 people dead in our neighborhood, including my uncle, and that they were buried in a mass grave.

Q: Were they among the first who were buried in a mass grave in Saffuri area in the first day of the bombings?
A: Yes.

Q: Can anyone else confirm these causes of death?
A: There is a doctor who was there during the burial, his name is Fath Alla, and you can call him.

Q: What were the political backgrounds of those who died?
A: They had none, they are merely civilians.

Q: How did you first notice the Fatah al Islam militants?
A: They used to buy and rent houses. You know, there is something you should know about Nahr el Bared camp, it is a trade camp. Unlike other camps, it is a market for regional villages and cities, like Akkar and Minyeh. This advantage made it possible for non-Palestinians, especially Lebanese, to inhabit the refugee camp. These Fatah al Islam militants continued coming to Nahr el Bared, forthe past three months, till they became huge.

Q: How was Fatah al Islam's internal policy?
A: They are trying to impose their policy on us. If they see someone drinking alcohol, they would beat him, and they used to encourage the youth to go to Mosques and pray. Not only that, they were too extreme. More than once, some of our inhabitants were killed by them; it was all over the news and TV. This militia was imposing itself on our camp and the Lebanese government along with the Palestinian officials is silent or cooperated.

Q: How do you explain their silence or cooperation?
A: I think the militia's existence for over three months is not a coincidence, but it is planned. The Palestinian officials have never been seen visiting the Lebanese government before, lately the visits were intense and raised suspicion. I think this may be a conspiracy taking place, against the Palestinian people and against the Palestinian existence in Lebanon. I would like to ask the following question: why is the camp being bombarded and not Tripoli, though in the latter the army has lost 27 soldiers? What we are witnessing today is an attack on entire camp, not only on Fatah al Islam. I honestly recall Sabra and Shatila right now. I'm also afraid something serious will happen in the near future.

Q: What about the nationalities of these militants?
A: Some are Lebanese, Saudis, Jordanians, Syrians and some are from North Africa; from Algeria and Tunisia. Most of them are non-Arab, from Afghanistan and Bangladesh, you can easily tell from the weird clothes they wore.

Q: How did they settle at the camp with such an arsenal?
A: Well, they bought and rented houses. They placed pockets of sand in front of their houses, loaded with guns and RBJ weaponry. This prompts the following question: how did this weaponry enter the camp?

Q: A report appeared on ABC which linked the poor living conditions of the Palestinian refugees, in Lebanon and Gaza, with terrorism, do you think to be poor is to be a terrorist?
A: Well, I was poor, and I am still poor, but I am a doctor and not a terrorist. This analysis doesn't make sense. As I recall, Osama Bin Laden is millionaire, is he not?

Q: Are there any organizations working in Nahr el Bared?
A: No, there aren't.

Q: Anything else you want to add?
A: I want to say that though there are many people dying, and it is a tragedy, nobody is talking about them. Another tragedy awaits the survivors, where do they go now? Who is going to rebuild the camp? Are we forever going to stay at other people's houses in the camps?

Sari Chreih is a student at American University of Beirut in Beirut.
Razan Al-Ghazzawi is a graduate student at University of Balamand. She is a member of Tlaxcala, and her blog is: Decentering Damascus
Originally posted http://ya-ashrafe-nnas.blogspot.com/2007/06/dr-saleh-bhar-lebanese-goverment-racism.html