Susanne Scheidt - The Lebanese Tragedy: a bit of suspicion 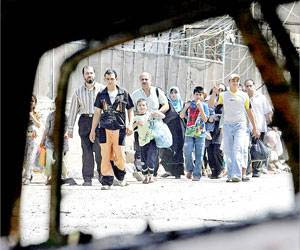 30 May, 2007
Dear awdaiti,
As used as I am to interpreting historical events through the lens that focuses on their inherent finalities, I’m unable to get out of my mind the suspicion that the facts of Nahr al-Bared have been drawn up with a specific plan in mind. With the purpose of emptying this site from its current residents and their ramshackle buildings, to make room for a “re-qualification” of this excellent real estate resource, in order to build a tourist harbour complete with hotels and shopping malls.

Of the quantity of money that has been promised for the reconstruction of a Lebanon that has been destroyed by the Israeli Air Force, not one dollar has been spent to date for the construction of the houses that have been destroyed in Beirut and in the southern part of the country, because Siniora’s government refuses to distribute the resources to the consortium of cooperatives Jihad al-Binaa, in which the majority of the victims are subscribed.

The USA has decreed that Jihad al-Binaa must not be enabled to claim any merits for the reconstruction of Lebanon, seeing as how it is an organisation that was established by Hezbollah. Extremely efficient, in that next to the engineers, architects and skilled labourers of tested professionalism, Jihad al-Binaa uses the labour of the victims themselves, as long as they are capable of working. It is a model that has already been tested and had allowed the reconstruction of every house, every village that had been destroyed during the Israeli occupation (1982-2000) and adequate housing under difficult circumstances to the hundreds of thousands of people who were evacuated from the southern areas of Beirut. If it were to pass through the Jihad al-Binaa consortium, the international donations would without a doubt be spent in the best way, since within one or two years the houses could be restored and the agricultural terrain cleared and rendered arable once again.

The Siniora government, so far, has not spent one single dollar in the reconstruction of housing, limiting its intervention to the repair of bridges and some principle roads. The USA have forbidden their banks to conduct any kind of transaction with Jihad al-Binaa and both the USA and France would like (naturally) that the “reconstruction” of Lebanon is translated into an influx of vital lymph for the huge real estate companies of the Hariri family and for the companies that are connected to them, to Walid Jumblatt and to the other speculators associated with the anti-Syrian “14 March” club.

The pouring down of more than a million cluster bombs upon southern Lebanon in the final hours of the Israeli military aggression, had the purpose of impeding a return of widespread human presence in the southern territory and in the southern areas of Beirut, defined as the reign of Hezbollah (the objective that was officially declared both during the offensive of April 1993, that of April 1996 and once again, at the start of that of July 2006). Now, the arrival of 8 cargo airplanes full to the gills of weapons from the United States to the Siniora government to carry out a war in the ghetto of Nahr al-Bared, has the stench of the desire to complete the Israeli operation of emptying selected areas of undesired populations. In the case of Nahr al-Bared, to remove an impoverished population from an area of enormous future value for the investors of capital.

The real number of those displaced from southern Lebanon is close to 500 thousand. They were forced out of their homes through Israeli occupation from 1982 on, and once again through the two heavy offensives of the Israeli Air Force in April 1993 and April 1996. It's this huge number of displaced, and the effort and skills and especially the organizational genius of Jihad al-Binaa that led to the construction of a whole satellite-city - the Dahiyya ("outskirts") - on the southern edge of Beirut. It's no secret that the Dahiyya was a sore in the eyes of the forces who organised in the March-14 bloc, just as Sabra and Shatilah had been a sore in the eyes of the Kata'ib forces during the Lebanese civil war.

At the beginning of the civil war, Pierre Gemayyel once told a group of European reporters that where Sabra and Shatilah stood, once there was a wonderful pine-tree park and that his Kata'ib forces would restore that park, once the Palestinian "squatters" were removed. Then again, about ten years ago, Walid Jumblatt - owner of the largest Lebanese cement factory - proposed to relocate the Palestinian refugees "squatting" on valuable real estate at the sea-coast and inside Beirut to the internal areas, into a remote valley in the mountains, where he would "graciously" build for them a big new concrete camp (with money from international donors).

As to the whole picture, my suspicion regarding the Nahr al-Bared is growing ever greater, the more this event unfolds into a nightmare, with tens of thousands still holed up inside the Nahr al-Bared camp and the Lebanese artillery shelling it mercilessly, repeating the Israeli mantra "we'll do our utmost to avoid excessive civilian casualties ...."

Susanne Scheidt is the coordinator of the Italian branch of Al-Awda, and activist for Palestinian rights. Translated from Italian by Mary Rizzo, member of Tlaxcala, network of translators for linguistic diversity. This translation is on Copyleft and may be reprinted as long as the author, source and translator are cited and the content remains unchanged.