Free Kassim - Declared Innocent by Italy, and abducted, arrested and tortured in Morocco 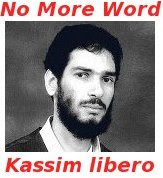 Free Kassim!
In May 2002, the Italian citizen Abou Elkassim Britel, handcuffed, hooded and denuded, dressed only in a sanitary diaper, was chained and then transferred by the CIA from Pakistan to Morocco, where he had been tortured by Moroccan Intelligence Agents, and where he is currently incarcerated.

In May 2003, freed without having been accused, after a long and terrible secret detention, at the moment of reentry to Italy, he was once again kidnapped and had disappeared; this time the Italian Secret Services were accomplice. He underwent another four months of secret detention and was again tortured, then he was put on trial without any kind of guarantee. First he was condemned to fifteen years in jail, then the sentence was reduced to nine years. Today he is incarcerated in the Ain Bourja prison of Casablanca, where he will be freed in 2012.

Kassim is innocent of the accusations made against him, those of terrorism, as is clear from the archiving of the Italian investigation. The European Parliament has solicited the Italian government to take concrete measures in order to obtain his immediate release. The Italian State is silent and therefore, the injustice against Abou Elkassim Britel continues. A movement in favour of the release of Elkassim - which asks the Italian government to commit itself in a clear and strong way - is developing in Italy and in the world. Be part of it!

To learn what you can do, please contact us at this address: mailto:info@giustiziaperkassim.net

For more information, see http://www.giustiziaperkassim.net/
Translations of this appeal are available in other languages at http://www.tlaxcala.es/