Ilegal Outposts, the arrogance of the Settlers 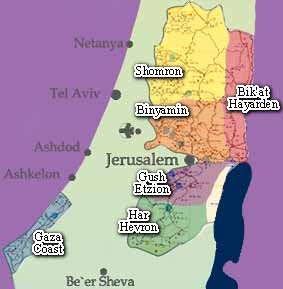 The Settler-friendly site, Israel National News, naturally, to commemorate the 2 year anniversary of the "expulsion" from Gush Katif, has this double video. The first segment shows the current "aliyah", that is, "ascent" of Jews who intend upon settling and building towns in Palestine - at Givat HaEitam, at the southern outskirts of Jerusalem, where the wall seems to bother them because it makes their robbery a little less simple. The police had "attempted", they claim, to block them from going there, but as you can see, they didn't succeed in this at all, as even the leaders of the Yesha were there to place stones in the sites where "2500 families" will have their new houses.
The second service is on the commemoration of the settlers who were returning to "Gush Katif" in order to see the homes that they no longer have. Quite interesting is the pain they express, for the injustice they feel for being made leave their homes (fully compensated, I must add). How is it they can't understand that same Palestinian suffering? When you look at the video, you understand clearly. It is a sense of being the "owners" of the place, and that the Palestinians are not even "others", they are the ENEMY.
This is Zionism, it's not about being fair, it's about wanting it all, feeling entitled to it all, and seeing those who have what you lust after as your enemies. Law, national or international, doesn't matter. What matters is greed and arrogance. http://www.israelnationalnews.com/TV/?act=one&id=2017
In the picture, a "Yesha Map". Yup, it's ALL Israel....