Peace on Earth and Goodwill towards men: A call for Freedom, Justice and Peace 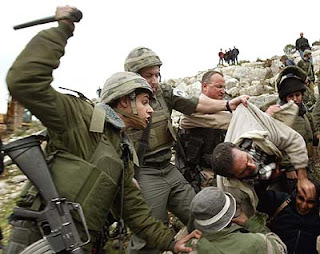 In the picture: "Israeli soldiers beat Palestinians protesting the construction of the barrier near the West Bank village of Bitduku"
Picture: REUTERS-Goran Tomasevic, Arab News, 3/8/04"
(This is also being translated to Arabic and other languages and distributed in Palestine and beyond. Please read and if you agree, email us your name, city, and state.)
We are Palestinians and others who believe in freedom, rights of refugees to return, and self-determination. We write to express our steadfastness, our unity, and to relay our vision for a just peace in Western Asia. We assert the following points:
* The Palestinian people endured incredible adversity and tragic historical confluence of events from colonization, ethnic cleansing, occupation, land confiscation, economic dedevelopment (and indeed also mistakes and collaboration). But there was also inspiring heroism, steadfastness, resilience, resistance, International solidarity, and more over the past 100 years.
* Some Palestinian leaders engaged in good faith negotiations with Israel hoping to end the occupation and achieve freedom and self-determination in the context of some division of land into two sovereign states. This led to signing of agreements including Oslo, Wye River, and Sharm El-Sheikh accords. Those hopes were dashed on the wall of Israeli intransigence supported by the US. Many agreements were violated and/or have expired without implementation (e.g. Oslo called for negotiations to be concluded in a five year interval and that expired in 1998). Israel's intention to consolidate its grip on the West Bank has become increasingly clearer. It is therefore incumbent on all Palestinians (whether in positions of leadership or not and whether they supported previous strategies or not) to contribute to a national rethinking of strategies to achieve our human and national rights. Each Palestinian (and our supporters) has rights and responsibilities in this regard.
* We condemn the US illegal invasion and continued occupation of Iraq that has caused the second largest refugee population in the world (second only to Palestinians) and resulted in the deaths of nearly a million Iraqis (and thousands of US troops). We believe that architects for that invasion are the same neoconservative Zionists in the Bush Administration who helped extend last summer's war on Lebanon and are now pushing for conflict with Iran. The lobby representing political Zionism is active in both major parties in the US and in mainstream media in such a way as to suppress open dialogue about US real interests and the suppression of constitutional rights for an endless "war on terrorism" that serves special interests (Zionists and the military-industrial complex). But we also believe that this debacle is now more and more recognized thanks to collective efforts. We believe we can effect real change in America and are inspired by the many new organizations formed and by the formation of coalitions bringing together many groups to coordinate and plan joint actions for peace with justice. We are also encouraged by the mobilization of Palestinians in exile and diaspora to work together regardless of their political leanings (e.g. see www.palestineconference.org).
* Despite the challenges, we believe that there are many options and opportunities open to us in the coming stages of the struggle. There is now a greater international understanding of the Apartheid nature of Israel. The apartheid wall is the last stage of a reality becoming harder to ignore (including to people like President Carter who wrote a book titled "Palestine: Peace not Apartheid"). Apartheid also exists within the Green line. Apartheid in South Africa ended because of the local resistance and also because of the way the African National Congress rallied international support for a campaign of boycotts, divestments, and sanctions. We were thus inspired when Palestinian civil society called for similar actions until Israel complies with the basic Palestinian rights (which also are called Palestinian Constants "Al-thawabet Al Falastinya"): rights of return, freedom from occupation and colonization, equality, etc. See
http://www.pacbi.org/boycott_news_more.php?id=66_0_1_10_M11
* Among options being increasingly discussed for political change are: working for equal citizenship in one state for all its people (Jews, Christian, Muslim, others), confederation, binationalism, and even using the two state scenario as an intermediate step towards achieving the border-less society that is being developed (e.g. in Europe). Many are now articulated in books and developed into associations and societies and even beginnings of political parties. We believe that discussions of these options are healthy and urge all to not limit their horizons of potential political solutions. It is the best measure of real democracy when people are empowered to think for themselves and develop the political structures needed. Yet, in all cases, the litmus test must be respect for basic and fundamental human rights as there can be no peace without basic rights.
* The Internet and other forms of communications gave us new tools to network, to educate others, and to work together to achieve our collective goals. In the coming and challenging stage of our struggle, older activists must redouble their efforts while making way for youth, women, and people with unique skills to step forward to take more leadership roles.
The Arabic saying is: "God does not change what is in a people (i.e. their destiny) unless they change what is within themselves." We are optimistic that we have within ourselves the tools and the resources to achieve freedom, justice, and peace which will be good for all people in Western Asia (what is referred to in Europe and America as "the Middle East") and people around the world. Thus we call for renewed and enhanced dialogue among all Palestinians (and our supporters) wherever we are to shape our future as a people.
(list of signers in formation and will be initially sent by July 20, 2007)
---------------------------
Mazin Qumsiyeh
http://qumsiyeh.org please send your adhesions of support for this call to support of Palestinians rights and for the necessity to protect and aid their struggle.