Translators against imperialism! This is a call-up! 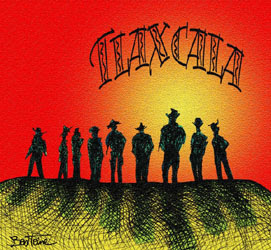 510 days, going strong..... Tlaxcala!
On this 16 July, 2007, Tlaxcala, the network of translators for linguistic diversity, comes to its 510th day of existence. During our first 509 days of activity, we have published and disseminated more than 3,000 articles, essentially translated by us, into 10 languages. Each day, an average of 5,000 people visit our website and many thousands of others read the translations on the sites and blogs that our friends kindly publish.
Our adventure is an experience that is, if not unique, rare, and as such, deserves some reflection: in our first 500 days of life, we can already make these observations:
Yes, it is possible to create independent media without capital. Yes, it is possible to create tools of communication, information and exchange that escape the control of all power groups, be they political or financial. Yes, it is possible to cross borders and to make cracks in the walls that divide.
Yes, it is possible for people of completely different backgrounds, characters, interests, ages, projects and experiences to cooperate with one another, to establish creative synergy.
Yes, it is possible to work charitably (without financial retribution) and to at the same time do work of high professional quality.
No, we are not the best, and we still have much work to do so that we can improve, no, we are not in competition with others.
What are our aspirations?
We aim to extend the existing free zones in the cyber-world and in the material world.
We aim to be able to translate and give voice to thought in a growing number of languages.
Currently, we translate into a dozen languages, but in the entire world, more than 5,000 of them are spoken. The road that stretches before us, therefore is still quite long, if we wish to put in contact with one another, all people who fight for freedom and justice, wherever they are: from Chile to China, from Nunavuk to Mozambique, from Greenland to the Tierra del Fuego.
We are dreaming of (and shaping) a new figure of translator.
In Tlaxcala, we are not only translators. We are also writers, militants, detectives, journalists, artists. The youngest among us is 22, and the oldest is 77. Through the daily practice of our work, we are constantly learning. Slowly, but certainly, each one of us is transforming him- and herself into a polyvalent activist, discovering new information, new approaches, new techniques, and especially, new horizons.
We aspire to be a school for one another. We believe that our experience can be useful to the numerous human collectives in the resistance movements throughout the world.
Tlaxcala is a network of translators for linguistic diversity. Each one of these words is important:
Network: this stands for a form of horizontal democracy without hierarchies, without central direction, without “up” and “down”, where each person is free to take his or her own initiative and to associate with the others. It doesn’t need directors, but simple coordinators.
Translators: each one of us masters at least two languages, and understands some others. We can consider ourselves a sort of peddlers, contrabandists, transgressors, agents of what José Marti called transthinking* , bridge-builders, throwers of bottles to the sea, with messages that we hope will reach some destination, emitters-receptors-disseminators.
Diversity: acting in favour of linguistic diversity, but not only linguistic, also cultural, philosophical, political, we are firmly convinced that the tendency towards one-language, one-way of thinking, one-art, one-party, one-faith, and so on, damages mankind as much as pesticides or genetically modified organisms threatens life.
Linguistic: it is through language that the human is fully human.
In a word, Tlaxcala struggles for “a world containing all other worlds”, to rephrase the wonderful Zapatista expression.
On our 510th day of our existence, we ask for all of those who are reading this message to reflect upon the manner that they may be able to contribute to rendering our project better, stronger, more effective, more useful, more attractive. We are still young and we have great ambition and great needs.
Contact us at tlaxcala@tlaxcala.es
*"Yo creo que traducir es transpensar ... traducir es pensar en español lo que en su idioma ellos (los autores) pensaron ... traducir es estudiar, analizar, ahondar." “I think that translating is transthinking… translating is thinking in Spanish what they (the authors) thought in their own language… translating is studying, analysing, digging” (José Marti, combatant, poet, journalist and… translator!)
Source: Tlaxcala
Original article published on 16 July 2007
Tlaxcala, the network of translators for linguistic diversity. This article may be reprinted as long as the content remains unaltered, and the source and author are cited.URL of this article on Tlaxcala: http://www.tlaxcala.es/pp.asp?reference=3436&lg=en