Gideon Levy - This is how moderates look 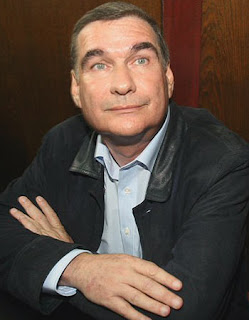 Haim Ramon (photo at left) has made a big comeback. As if renewing the Hebrew language, he has coined the term `infrastructural oxygen` - Israel should strike a blow at Gaza`s infrastructural oxygen. Faithful to his suggestions in the Second Lebanon War (`It is permissible to destroy everything`), he is now the progenitor of the doctrine advocating cutting off the electricity, fuel and water supply to Gaza. Ramon is very proud of his demonic plan: `It`s the first time the government has discussed these types of proposals,` he said. In his eyes, the legal aspect is `hallucinatory`; there is no difference between Hamas and Al-Qaida. And what will happen if this cutoff of water and electricity to Gaza is not effective? `Until we try, we`ll never know,` the minister told an interviewer. That is, we are dealing with an experiment on human beings. As we all know, Ramon is a representative of a centrist party and is considered one of the party`s moderates.

Foreign Minister Tzipi Livni is a moderate, too. She also supports the Ramon doctrine. She says that, `It is inconceivable that life in Gaza continues to be normal.` In the view of the moderate foreign minister, life in Gaza is `normal` - it seems she has no idea about what life is really like there - and a cutoff of supplies will bring an end to the Qassams. The hungry, thirsty and suffocating populace will exert pressure and, hocus pocus, there will be no more Qassams.

These crazy ideas have elicited fewer arguments among us than the proposals to require bicycle riders to wear helmets. The whole debate was conducted in a dignified manner: One person proposes cutting off electricity, while another suggests putting an end to the supply of cigarettes and perfume. No one expresses any opposition or calls out in protest - all we have to do is hear the position of the legal advisors, to decide and then to execute. Avigdor Lieberman, Shaul Mofaz and Avi Dichter have become superfluous: The moderates are doing the necessary work. Israeli discourse has become monstrous - and the terrible thing about it is that these are no longer the proposals of the loony fringes, but rather of the centrist stream. How does the right-wing put it? `There are no moderate Palestinians.` Well, there are no moderate Israelis. When it comes to us, the center is the right in disguise.

But, as luck would have it, just as this incitement to commit war crimes was being raised, a report was issued at the end of last week by Human Rights Watch, a reputable and unbiased American organization. The report mentions evidence that Israel Defense Forces officers were responsible for committing war crimes in Lebanon and that Israel seriously violated international law in indiscriminately killing hundreds of citizens. Ramon and Livni`s proposals have prepared the ground for the next report. After implementing the Ramon plan, the call will intensify to boycott Israel and bring those responsible for the next crime to trial.

There is no room for debating legal nuances: Inflicting intentional harm against a civilian population constitutes a war crime. And 40 years of occupation in Gaza has not ended - it has only changed form. But Ramon`s path is not only illegal and immoral, it is also ineffective. How long will we continue to believe that striking a population will make it more moderate? Are 40 years of bitter experience not enough to teach us that the opposite is true?

Another question: Is Gilad Shalit`s fate more dear to us than the fate of the children of Sderot? Why is it permissible to negotiate with Hamas when it comes to Shalit, while the option of similar talks with the group on a cease-fire - the only way to ensure the safety of Sderot`s children - is considered heresy? The parents in Sderot should have been the first to call upon the government to reach a cease-fire, instead of dispatching the IDF into Gaza and carrying out Ramon`s zany proposals.

We should recall for a moment the last electric blackout we experienced. In June 2006, the Israel Electric Corporation implemented electric outages lasting several hours - just several hours. All hell was raised: Telephone exchanges collapsed as people stuck in elevators called for help; a resident of Ofakim who was attached to an oxygen machine was hospitalized in serious condition. Are Livni and Ramon prepared to realize the significance of cutting off `the infrastructural oxygen` for days and weeks? Are they ready to take responsibility for doing so after the world has had its say and perhaps even takes action? Several convicted statesmen are already sitting in the prisons in The Hague.
http://www.haaretz.com/hasen/spages/902119.html