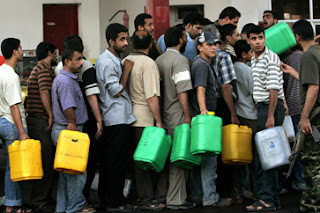 Bethlehem – Ma'an – The Israeli security cabinet declared the Gaza Strip an "enemy entity" on Wednesday and voted to gradually cut off fuel and electricity supplies to the poverty-stricken territory, according to Israeli press sources.

However they voted against disconnecting the Gaza Strip's water supply.

The pretext for the isolation is that it is a response to the Qassam rockets continually being fired at Israeli targets. Their aim is to use the civilian population to put pressure on Hamas to halt the rocket attacks, by cutting off vital resources gradually.

Initially electricity supplies will be disrupted if rocket fire continues. It will be reduced just to enable hospitals and basic services to function. Israeli sources said that Israeli will maintain the supply to the Gaza Strip of fifty-megawatts of electricity, one third of the usual supply. This electricity is solely meant to enable the functioning of hospitals and other vital services.

Vast quantities of fuel enter the Gaza Strip from Israel. Israel wants to reduce these amounts to create a fuel crisis.

Israel will limit the performance of the border crossings to the minimum and to open these crossings twice a week as a maximum. This will include commercial crossings.

People will only be permitted access to Gaza through Egypt.

The Israeli Cabinet voted to prevent the delivery of money to the Gaza Strip both in cash and cheques. They will only allow the money required for public services to be allowed in.

Hamas spokesman, Fawzi Barhoum, described the cabinet vote as "a declaration of war."

The Israelis believe the plan will be met with approval by several Arab countries.

The Israeli daily newspaper Ha'aretz also reported that Ehud Barak advised the cabinet that a major ground incursion into the Gaza Strip is becoming more likely every day. But he said other options would be considered before a major offensive.