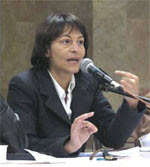 Comment in The Guardian Tuesday September 18, 2007
The government must acknowledge the present catastrophe in Palestine is a direct consequence of Israeli intransigence. No people, territory or issue on earth have had more international attention devoted to them than Palestine and its people. Yet no conflict looks further from resolution, and no people further from achieving the freedom promised them. More Palestinians lack more basic freedoms today than they did 60 years ago. While an expensive and extensive peace process was in full swing, Israel managed to illegally expropriate most of the occupied West Bank and Arab East Jerusalem, install hundreds of thousands of illegal settlers, kill more Palestinian families, arrest more young men, destroy more crops, homes and businesses, build a monstrous wall deemed illegal by the international court of justice, and set forth, unchecked, a policy of aggressive expansionism in Palestine that continues until this moment.

Citizens of this country may wish to ask why this is so, and what on earth their government has been doing all this time with their money. Yesterday the government attempted to answer this question with the launch of a report on the Economic Aspects of the Peace Process. What the report doesn`t explain is the direct link between throwing economics at this conflict and the repeated failures to solve it.

The symbiotic relationship between the illegal `facts on the ground` created by Israel in occupied Palestine; the simultaneous loss of nerve by almost all international leaders and institutions to reverse those facts; the subsequent flurry of international activities designed to avoid challenging illegal Israeli actions - this triangle of desolation has been masterfully described in a remarkable publication by Chatham House, entitled Aid, Diplomacy, and Facts on the Ground: the Case of Palestine. Its authors -World Bank representatives, UN officials, humanitarian agencies - detail the economic, political and diplomatic strategies by which international donors have (by deafault or by design) encouraged illegal Israeli practices that have made peace impossible. Without polemics or partisanship, these expert contributors coolly demonstrate the calamity of this approach, and suggest practical solutions to redirect attention towards doing good.

Two of the most treacherous mechanisms of avoidance need highlighting: diplomacy through international negotiations, and the type of economic assistance given to an increasingly impoverished Palestinian people. Since the Oslo agreement in 1993, every subject Israeli governments refused to discuss was removed from the negotiating table. Unfortunately this required excluding the people and issues essential to resolving the conflict: the Palestinians and their right to their land.

First it was the refugees, the majority of the Palestinian people; absurdly,the main victims of the conflict were denied respect, involvement, and participation in peace. Next came the elimination of an entire sector of Palestinian representation under occupation: some assassinated, others now languishing in Israeli jails in their thousands, most of whom want peace -just not one entirely on Israel`s terms. And finally an international boycott of any elected party whose political views unsurprisingly run counter to its enemy`s.

An inevitable outcome of these exclusions is that all civic-minded, active and representative Palestinians have quit, in revulsion, the corrupted public space and secret backrooms of such negotiations.

As well as entire sectors of people, political issues Israelis deemed unacceptable have also been pushed off the agenda. This is the ugly shape of the international conference President Bush is seeking to convene in November. Its purpose is to legitimise the intolerable status quo, especially Israel`s recent military conquests. Worse, it will endeavour to demonstrate, through a PR campaign by paid-up pro-Israel lobbyists, that the deal is authentic and supported by ordinary people uniting for peace.

Everyone who disagrees will face being smeared as marginal, anti-peace, ordangerously extremist.

The 'problem' of Palestine is now restricted to a discussion in purely economic terms. It is not the military occupation, the enforced exile and statelessness of millions of Palestinians, or the daylight robbery of Palestinian land that needs confronting, but the lack of economic stability in occupied Palestine for jobs and development.

The latest initiative from the government suggests improvements driven by private investment. The absurdity of proposing to stimulate investment in this hell - where because of Israeli closures and checkpoints Palestinians cannot trade between their own towns much less with the outside world - or the fact that the present economic catastrophe is a direct consequence of the military occupation, gets no acknowledgement here. By avoiding the real issue of Israeli intransigence, and with no plan on tackling it, neither jobs nor justice are on offer to Palestinians. They expect international support to help them win their freedom - or at least not assistance in their oppression. As Mary Anderson, a contributor to the Chatham House book, explains: if you can do no good in Palestine, at least do no harm..