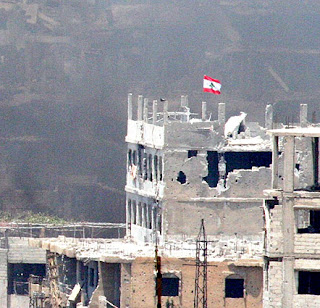 Victory celebrations are dominating the Lebanese airwaves for the foreseeable future and presidential election "campaigns" here are in full swing.

The issue of reconstructing the Nahr al-Bared refugee camp will never see the light of day in any of the Lebanese media outlets, whether pro-government or opposition -- just like the humanitarian crisis at Baddawi refugee camp has failed to capture any front page headlines over the past three months. The sole exception being when the disgruntled double-refugees attempted to return home, only to find themselves accused of attacking the Lebanese army. Shots from unidentified sources resulted in the death of three returning Palestinian refugees. Apparently human suffering with no potential political gain is not newsworthy.

Living conditions in the Palestinian refugee camps have never been easy. Lack of basic amenities, sub-par health care, and overcrowded schools are the common denominators between all the camps on Lebanese territory. None of the densely populated camps are in a condition to host a sudden influx of tens of thousands of twice-displaced refugees. Naturally, the overflowing Baddawi will not be a viable home for the Nahr al-Bared residents who will move back to their homes (reconstructed or not). The skeletons of buildings will be patched up, most likely by the refugees themselves with the help of the handful of activists that still care about the plight of Palestinians. These death-infested, bomb-riddled structures will make for a more dignified living than the pre-fabricated cardboard boxes, designed for nuclear families rather than traditional Palestinian extended ones, that have surfaced as alternative homes courtesy of some generous donors. Of course, the sea-front strip of the camp will be kept off-limits by the Lebanese army for questionable future development.

Hopes for real aid materializing from the Lebanese or other Arab governments for the reconstruction of Nahr al-Bared are delusional. The precedent was set by the snail-paced reconstruction of south Lebanon following the 2006 Israeli war on Lebanon. And unlike the residents of south Lebanon, the Palestinian refugees do not enjoy the strong political backing of any major Lebanese or regional power. No propaganda machines will be mobilized for their sake. History shows that media coverage of the camps only occurs when it means casting Palestinians in a negative light. Never has a media campaign been dedicated to addressing the cyclical victimhood of the residents of the camps. They are on their own and at the mercy of often failed, albeit generous, promises.

Sadly, the repopulation without proper reconstruction of Nahr al-Bared would not lead to standards of living much different than those in Ein al-Hilwe or Sabra. The lack of utilities and infrastructure will not be missed much as the residents of Nahr al-Bared faced the same problems even before the birth of Fatah al-Islam and the destruction of the camp. Over the years, Palestinian refugee camps have been decked with a constant dose of heavy artillery of Lebanese government, Arab, and international neglect. Neglect as ravaging as the half-ton bombs airlifted from the US and other third-party allies like Jordan to be dropped on Nahr al-Bared. The attention given to Nahr al-Bared will rapidly wane, and as always none of the humanitarian or political issues associated with the Palestinian camps will be addressed. Meanwhile, a new generation of Palestinians can now claim their own painful memories of the ongoing struggle for existence. The refugees from Nahr al-Bared and elsewhere are left, until further notice, with only hopes and prayers that the next incident involving one of their camps will not be as bloody and devastating as previous episodes.
Jamal Ghosn is a 28-year-old strategy consultant from Beirut. He has covered Lebanese affairs on his blog http://jamalghosn.blogspot.com/ for over two years.
http://electronicintifada.net/v2/article8981.shtml