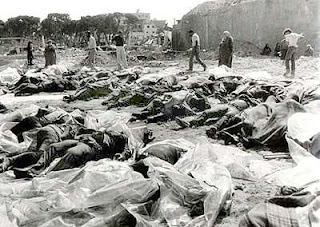 A quarter century ago, acknowledged Israeli war criminal Ariel Sharon, commander of Israeli occupation forces occupying southern Lebanon, allowed Lebanese fascists to massacre up to 3,000 Palestinian civilians of all ages in the Sabra and Shatila refugee camps.
Tel Aviv had carried out an invasion of Lebanon in June of 1982 with the complete backing of the Ronald Reagan government of the U.S. It continued its war of aggression against Palestinians and Lebanese with the backing of U.S. imperialism and the powerful interests of finance capital that drive it to seek domination of the oil-rich and strategic Middle East.
During the summer of 1982, the Israeli military mercilessly bombed Beirut, killing more than 20,000 people, mostly civilians. In September 1982, a ceasefire agreement was forced upon the Lebanese and Palestinians resisting the assault, which resulted in moving most Palestinian fighting forces out of Lebanon.
Israeli forces surrounded the Palestinian refugee camps of Sabra and Shatila in Lebanon. Under Sharon’s orders, the Israeli forces backed up the entrance of Lebanese fascist forces on that Sept. 15. These forces carried out the mass slaughter—mass lynchings really—of the Palestinian civilians in the camp. The killers were Lebanese fascists; their physical support came from the Israelis; their bullets were made in the USA.
The attack on Sabra and Shatila was meant to instill terror. Yet the struggle of the Palestinian people continues today, as does the brutal repression by the nuclear-armed Israeli state.
Today, anti-war activism has focused a spotlight on the phony “debate” among Democrats and Republicans on Congressional Hill over a vague plan to gradually reduce troop deployment in Iraq. But both sides of the aisle on Congressional Hill have funded that brutal war as well as the occupation in Palestine.
Billions in financial and military support, without which Tel Aviv’s occupation of Palestine could not last a day, have been quietly rubberstamped by Democrats and Republicans—no matter which party of big business occupied the Oval Office.
The struggle of the Palestinian people deserves the support of the entire anti-war movement, which can raise—in one loud, clear voice—support for the right of Palestinian self-determination, sovereignty and right of return to their historic homeland.
The Palestinian people have fought for these rights for more than half a century, and now, as they commemorate Sabra and Shatila, they continue that struggle today. Long live Palestine.
Articles copyright 1995-2007 Workers World. Verbatim copying and distribution of this entire article is permitted in any medium without royalty provided this notice is preserved.