Rights Based Activism: Sweeping war crimes under the 9/11 rug 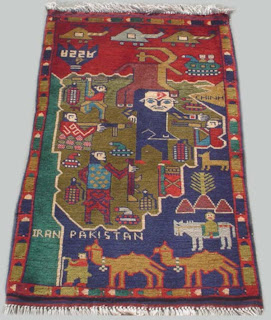 By Mary Rizzo, Italy
When someone feels concerned about events that take place in the world, there are two reactions that tend to come about: either one is resigned to a state of complacency or one starts to panic. Both of these reactions are attitudes that, when carried to extremes, can have physical and psychological consequences. While some may claim that apathy never hurt anyone, when it reaches a chronic level, it can cut off the networks that are sensitive to all outside stimulus; the negative and the positive merge into one another and not only do the suffering and pain one sees in the world bring about no reaction, but joy and beauty have less power of transport. There is a levelling out that can render one not only powerless to do anything about the bad things that one witnesses, but prevents one from even caring anymore. I think we’ve all been disappointed by politicians or ideologies that seemed to promise so much progress and justice, but have delivered so little. It’s understandable to wish it all away.

The opposite reaction, panic, when allowed to manifest itself, takes away our most important tool as concerned and thinking people: reflection. We feel that escape or action alone can change situations (or subtract us from them) that we deem intolerable. We tend to respond to superficial stimuli without understanding either the conditions or the variables that give them context and meaning, and what is worse, we stop taking into account the consequences and ramifications of any actions we might take. Our personalities can take on the distorted image that is mirrored by the apathetic response: we react to everything in the same rigid way, we become insensitive to the terrain on which each individual situation grows. Roots and plants are pulled up together with the weeds. The land we’ve just passed over becomes desolate and barren. We fail to differentiate what is truly poisonous from what instead will bear fruit and flower.

I’ve often asked myself the way to find a balance between these two tendencies. Luckily, I’d grown up in a time and place where an appropriate response was allowed to develop. I’d been fortunate enough to have grown up surrounded by people who were neither complacent nor over-reactive. While some of those with whom I’ve been the closest to have held different views from mine, we basically all held to one solid point in the American tradition as expressed in its Pledge of Allegiance, “liberty and justice for all”. Unfortunately, I’ve seen the tradition of liberty being mutated into an obsession with “security”, where rights don’t seem to be considered sacrosanct. I wonder what justice is supposed to mean these days when every American can see that the President can lie about Weapons of Mass Destruction (starting a war with that pretext) and not only not be forced to trial for this offence, but get re-elected and remain in office. Maybe I’ve been away far too long, but I don’t think that only expatriates feel that things in America have gone very much amok.

I was really lucky that I was exposed, at times without even knowing it, to the classic “thesis – antithesis – synthesis” way of argumentation. Interpretation of events was not entrusted to a “master of discourse”, to some kind of expert, because with more acute reasoning, deeper research, an open mind, it was possible to see variations on the things that at first seemed to make sense. I was proud of the fact that I could be flexible and even play the devil’s advocate when needed.

Yet, as I find myself in that famous space called “mid-life”, I find myself tending more and more towards “thesis”. My mind’s closing as I crystallise and sharpen the ideas that started out as opinions. Now they are beliefs. I “know” what is right and what is wrong and I am less capable of thinking relatively. I am no longer able to tolerate “exceptions” to general rules that go under the banner of “ethics and humanism”. Violations, even temporary ones, of human and civil rights find very little patience on my part. I care about rights, I don’t give a damn about politics or pragmatic thinking. I don’t care about supporting “the war effort” or “our troops”. The US politicians are so used to using their soldiers to do their dirty work that this time they are using the soldiers’ well-being and safety as emotional blackmail against its citizens. These calls to tolerate the intolerable look more and more like pure propaganda, the kind that we in the “enlightened and free” West were told that the Communists and Nazis used in order to brainwash their citizens so that they could carry on their nefarious projects of world domination.

The groupthink comes from the hegemonic power, the elite and those who have an obscene material interest in war and destruction for “filthy lucre”. Recognising this as the particular characteristic of brainwashing – which I on certain occasions consider as “the power narrative” and the “controlling mechanism”, I realise that that only way to fight it is to use similar tools. There won’t be the kind of open discourse that seemed possible many years ago (we all agreed then that freedom was worth more than what some call “security”, we thought it was everything). With these dominant forces that have done such intense work in scaring us into panic or numbing us into complacency, I choose to opt for the propagation of my bias. I opt for using the tools of communication available to me for information, discussion, networking, activism. It might not make any difference at all, but it seems to help some at least on the psychological profile!

What I do find rather disconcerting is that caring people are forced down particular “empathetic highways”. Yesterday, for instance, was the sixth anniversary of the 9/11 attacks. Obviously, in New York and in Washington, the commemoration is a major event. It is relevant to these places. But, I ask myself, “why does it have to be the major news item in Rome, and I’d imagine this is true in Paris, London and Sydney as well as almost everywhere else in the West.” An opposition leader in Italy’s lower house of Parliament, Pierferdinando Casini, had brunch with the US Ambassador Spogli. This is what he had to say in a statement released to the national news service, ANSA,

“On the 11th of September, not only the American people were hit, but also and especially Western values. There is a great deal of bitterness in noting how quickly the West has forgotten this lesson. It’s the same bitterness that I have to express for the lack of any kind of official ceremony or any sort of initiative by the Italian Government. I will ask the Speaker of the House Fausto Bertinotti to commemorate that even today in the session, the lack of which will risk looking like guilty indifference.”

Besides the fact that this “strike on Western Values” is a value judgement I don’t happen to share (if anything, the US was specifically targeted, not the West in its entirety), I wonder how normal it is for the calendar of official commemorations of events that happen in foreign territory to be dictated and influenced by the various Ambassadors. All nations are in theory autonomous. I’ve never heard of the sixth year anniversary as being a canonical one. If it is, it’s news to me. I thought that it was more normal to mark the passing of events at a rhythm of five year multiples. This August marked the Sixty (not six) year anniversary of the Hiroshima and Nagasaki bombings. In Italy, even though it was a nice round number, hardly a word was uttered. Oh, shall we blame it on the typical Italian habit of “Closed for Holiday”, which does not exclude the government. No, I’m sure it’s due to something else. Perhaps Casini or Prodi had lunch with Spogli to discuss how convenient it would be to commemorate the dirtiest of war crimes ever committed, the dropping of atomic bombs by the US on two Enemy towns that had nothing to do with the military-industrial complex. They were ordinary towns with ordinary civilians who happened at that moment to be targeted for destruction in the most horrific manner possible. The more information that comes out of this, the more we are able to see it was not the last act in the Second World War, but the first in the Cold War. Moreover, I’ve never read or heard of the US giving a formal apology, much less reparations. It’s obvious, what is convenient for the United States has got to become dogmatic policy for its allies. The good will be exalted and celebrated and the evil will be forgotten and shoved very far under the rug.

Don’t let me be misunderstood. I do not believe that the terrorist attacks against the US targets were in any way justified or justifiable. I do believe that it is simply one of the heinous acts of blind violence against innocent people that are the leitmotif of our era, from Auschwitz to Hiroshima to the Israeli siege against Lebanon. What happened in New York and Washington was criminal, but I think most will agree that it did not give the US the right or the legitimacy to attack Afghanistan. Innocent Afganis are the victims of blind American aggression. Certainly, they didn’t go out as spectacularly as the victims of the skyscrapers, but the innocent blood that was shed as a result of the American reaction to the 9/11 attacks was more than double that of the victims on American soil, and the war still rages on, forgotten in the background of the second major war the Americans started for reasons of “preventing terrorism”. The US reactions were reactions of panic… now apathy is setting in. It’s about time we focus on getting ourselves back on the right track.

It’s time that we started to think for ourselves, as individuals and as nations. We have to stop being fed the “Good Western Narrative” and we have to see things as they are. It doesn’t mean abandoning our empathy, but rather, abandoning political reasoning, and embracing the rights based approach to activism. We have to really WANT liberty and justice for all.