War against Iran? Cooooming up! (the AEI loves us all) 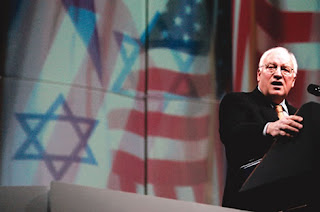 Barnett Rubin is the last person to set off wild speculation about war with Iran: the longtime Afghanistan expert is wonky, moderate and thoroughly analytical. But that's exactly what happened on Wednesday, when Rubin blogged that an anonymous, plugged-in friend told him that Dick Cheney's office had issued "instructions" to conservative think tanks like the American Enterprise Institute to start a drumbeat for attacking Iran. In order to determine precisely what he's alleging, and get a sense of its credibility, I spoke with Rubin, a senior fellow at NYU's Center on International Cooperation this morning.

Cheney's likely motivation for issuing such instructions to his think-tank allies would be to win an inter-administration battle over the future of Iran policy. Cheney, an advocate of confronting the Iranians militarily, faces opposition from the Joint Chiefs of Staff, where the primary concern is preventing an open-ended Iraq commitment from decimating military preparedness for additional crises. A new war is the last thing the chiefs want, and on this, they're backed by Defense Secretary Bob Gates. "It may be that the president hasn't decided yet," says Rubin.

On this reading, the real target of any coordinated campaign between the VP and right-wing D.C. think tanks on Iran isn't the Iranians themselves, or even general public opinion, but the Pentagon. Cheney needs to soften up his opposition inside the administration if Bush is to ultimately double down on a future conflict, something that a drumbeat of warnings about the Iranian threat can help accomplish. When asked if a third war seems surreal, given the depth of investment the U.S. has given Iraq and Afghanistan, Rubin replies, "I'm out of adjectives."

How would an actual war be launched, given the expected opposition of the Democratic-controlled Congress? To that end, President Bush's decision to declare Iran's Revolutionary Guard Corps a terrorist group provides an opportunity. If the IRGC, Iran's alternate military, is a terrorist group, Bush could claim authority under the September 18, 2001 Authorization for Use of Military Force in Afghanistan to take action against Iran without Congressional approval, citing the AUMF's broad provision that "the President has authority under the Constitution to take action to deter and prevent acts of international terrorism against the United States." (It's a stretch, but the administration has already made the more-tendentious argument that the AUMF authorized the warrantless surveillance program.) "The AUMF applies, according to the Cheney-Addington view of the Constitution," says Rubin.

In a post today, Rubin said the drumbeat has already started. He points to a Newsweek piece by AEI's Reuel Marc Gerecht contending that designating the IRGC a terrorist group "will do little to change the current state of play" between the U.S. and Iran, but that diplomacy is an exercise in futility, as the Iranians, "determined to sow chaos beyond [their] borders," are "accomplished practitioners of hard power." Rubin said he didn't know specifically that Gerecht was part of the campaign, but he pointed to the argument as fitting neatly within the pattern.

Similarly, on Monday, AEI will host two events that Rubin considers part of the drumbeat. First, that morning, former Speaker of the House Newt Gingrich will give a speech contending that the war on terrorism needs to be viewed as "a world war that pits civilization against terrorists and their state sponsors who wish to impose a new dark age," according to AEI's preview. That afternoon, AEI brings together a panel featuring former CIA Director Jim Woolsey, retired General Jack Keane, who helped design the surge in Iraq, and longtime Iran hawk Michael Ledeen to discuss Ledeen's new book, The Iranian Time Bomb: The Mullah Zealots’ Quest for Destruction. Rubin didn't mention it, but the Heritage Foundation recently hosted an interagency Bush administration war game attempting to anticipate Iranian responses to a U.S. bombing campaign.

None of this is to say that a military attack is imminent. But Rubin says that two conclusions are possible from the increased talk of war with Iran.

First, the administration "does not believe the war on terror is a war against al-Qaeda." Al-Qaeda would probably be the greatest beneficiary of U.S.-Iranian hostility thanks to a lack of administration focus on it. (It would also place the U.S. in the awkward position of fighting an affirmed enemy of the jihadist organization.)

Second, the administration believes "U.S. domination in the Middle East is necessary in order to defeat an ideological, transnational entity that's the equivalent of Nazism or fascism" -- only this time that entity is Iran's wheezing blend of Shiite theocracy. The likely takeaway of a U.S.-Iran war to the Muslim world, he said, is that the administration "is in fact engaging in a crusade to change the culture of the entire Muslim world." At that point, Gingrich will surely have the civilizational war he's set to describe on Monday.