Haniyeh interview: "Abbas, the conference is a trap" 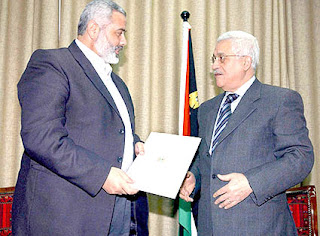 HANIYEH TO ABBAS: “THE CONFERENCE IS A TRAP. DON’T GO”
by Umberto De Giovannangeli (l’Unità, 12/10/07)
“We want to say to President Abbas: don’t endorse the deceitful conference that President Bush wants to hold in order to try to whitewash his failure in the Middle East. That conference is a trap the Palestinians must not fall into.”

These are the words of the leader of Hamas Ismail Haniyeh, who Abbas forced into stepping down. In this interview with l’Unità, Haniyeh shows an opening to dialogue with Fatah: “There’s no way left for us but to set up a national unity government. We’re ready as of this moment to join a negotiation with President Abbas and Fatah, but it must be clear that what was carried out by Hamas in Gaza was nothing but a reaction to a putsch attempt from gangs working on behalf of people who were aiming only at strengthening their own power”. He is referring to Fatah’s former strong man in Gaza, Mohammed Dahlan.

Abu Mazen and the Israeli Premier Olmert are engaged in defining a Joint Declaration in view of the international US-sponsored international conference. What’s your position?

“The conferenced hatched by Bush is only a deceitful one. It’s a trap we Palestinians must not fall into. We are talking about an American attempt at whitewashing their failed Middle East policies. I want to tell Abbas: don’t let yourself be taken in by this trickery.”

Olmert has committed himself to implementing a peace founded on two States.

“It’s a deception. Olmert continuously speaks about peace but those are only words. Facts show us another story: confiscated property, villages divided by the wall in the West Bank, a population, in Gaza, that has been living under siege for more than a year. Is this the peace Israel wants? Olmert speaks about a State, so does Bush, and meanwhile the West Bank is being shattered into thousands of fragments pieces that they dare shamelessly call a ‘State’.”

Israel argues that Hamas doesn’t aim at setting up a Palestinian State but only at destroying the Jewish one.

“Hamas won at the elections, free elections, presenting a clear programme, which we didn’t fail to observe: to strive for a State of Palestine over the territories occupied in 1967, a State with Jerusalem as its capital. This is our government programme.”

If this is the case, why did Hamas carry out the military coup d’état in Gaza?

“We’re willing to accept an investigating commission by the Arab League that may shed light on what really happened in Gaza.”

And what is thought to have “really” happened?

“An attempt at overthrowing what the elections had sanctioned. I ask you: whenever has it happened that a movement which has obtained its mandate through an election victory then carried out a coup d’état? The truth is that in Gaza there was someone who wanted to come to an armed showdown in order to overturn the outcome of the elections.”

Concerning your relation with Fatah, is the only dialogue an armed one?

“No, it must not be. There’s no other alternative but a national reconciliation government, and even Egypt is aware about this, as they have offered themselves as the mediator. As far as I’m concerned, if it’s of any use, I’m willing to take a step backward. Our administration in Gaza is only temporary.”

Is Hamas willing to have talks with Israel? And if so, what will be the basis of such talks?

“We’ve stated for a while that we’re willing to negotiate a lasting truce, at least 10-15 years. On the condition, however, that Israel puts an end to the siege of Gaza, to the building of the Wall in the West Bank, that it releases the Palestinian prisoners locked up in its prisons, that it brings to an end the assassinations of the militants and leaders of the Intifada. Israel knows well that Hamas is able to enforce and to fulfil the accords it makes. Armed resistance isn’t the goal of Hamas but it remains one of the necessary means to obtain the liberation of Palestine. But it must be clear: Hamas isn’t against peace but only against capitulation.”

But, if you are in favour of peace, why don’t you agree to recognize Israel?

“Because an oppressed people must not be forced to recognise its own oppressor. Israel’s recognition cannot be a pre-condition for a negotiation, if anything, it’s one of the issues to be discussed.”

“It’s certainly not us who fear the elections. But, in order for the elections to be free, first of all the siege against Gaza must be lifted and then everyone has to recognise the only body that really represents the people’s will: the Palestinian Legislative Council. (The parliament of the Occupied Territories where Hamas has the absolute majority, editor’s note.) We are willing to open a confrontation with Fatah even over this issue, without any blackmailing.”

In an interview with l’Unità, Italian Foreign Minister D’Alema repeated that it’s possible, under certain conditions, to open a dialogue with Hamas. What is your reply?

“I’ve appreciated Italy’s stance and the endeavour it’s made in order to stand up against the Americans’ ostracism. Hamas is a friend to Italy and it is willing to discuss the demands put forward. Italy might undertake an exploratory mission: Prodi and D’Alema are welcome in Gaza. Yet, to discuss is one thing, to submit to a diktat is another kettle of fish.”

There are some who claim that Hamas intends upon having a state of “its own” in Gaza.

“This is false. I must repeat: our aim was and is that of setting up an independent state over all the territories occupied by Israel in 1967. We won’t be the ones who fail to keep this commitment.”

(Osama Hamdan collaborated in the interview).

There is no l’Unità link; the article can be read at: http://www.informazionecorretta.com/main.php?mediaId=13&sez=110&id=22229
Translation from Italian by Diego Traversa, revised by Mary Rizzo, members of Tlaxcala